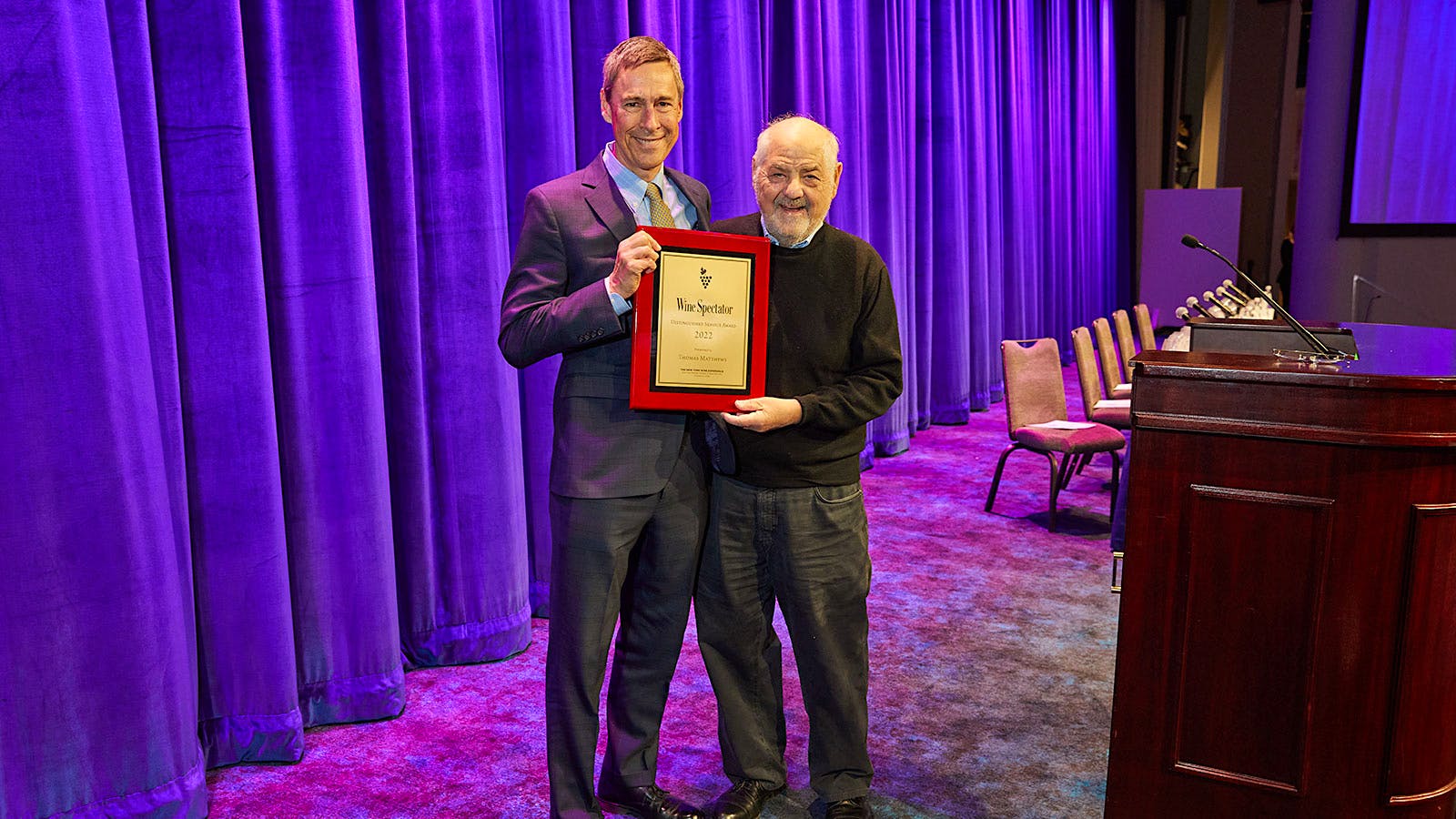 Matthews, who joined the publication full-time in 1988 and served as its executive editor for 20 years, grew Wine Spectator’s readership to more than 3 million wine lovers, making it the world’s most-read wine publication. He was also the magazine’s longtime lead taster for the wines of Spain, championing the country’s wines as they earned their place on the world stage. Matthews also helped grow the Wine Experience itself as its longtime lead host, and helped build the event’s charity beneficiary, the Wine Spectator Scholarship Foundation, which has raised more than $35 million for scholarships and grants for the hospitality and wine industries.

Announcing the newest Distinguished Service Award winner to the sold-out crowd, Shanken shared that he met Matthews for the first time in a Paris hotel room. Shanken offered him a job, and Matthews joined Wine Spectator’s London office full-time in 1988; a year later he was promoted to the magazine’s New York bureau.

Shanken recalled his search for a new executive editor in 1999. “I had three people in mind. Tom was not one of them.”

“Tom wrote me a letter, asking me to consider him,” Shanken continued. “He wasn’t even on the list! [But] I thought about what I needed, what I wanted to lead the next several decades of the magazine. Tom fit the bill. People were shocked. It’s one of the greatest decisions of my life. … We all owe him a debt of gratitude.”

Matthews took the stage to an extended standing ovation. “Let’s get one thing straight: I am not a Distinguished Service Award kind of guy,” he laughed.

“[Past winners like] Robert Mondavi—they made the wine industry what it is,” Matthews said to Shanken and the audience. “I have been privileged to be an observer and a supporter of the wine industry, but I thank you as a token of our friendship, and our love.”

“I was heartily impressed by the suite at the Hotel Crillon, and the bottle of Dom Pérignon in the ice bucket. Marvin had a vision. He told me that one day Wine Spectator would be the most successful and widely read wine publication in the world. … It was a newsprint tabloid [back then]. It was energetic and ambitious, but it was pretty far from world-renowned. Somehow we persuaded each other, and I took the job.”

”And today Wine Spectator is the most widely read and successful wine publication in the world,” Matthews said. “It was a great ride.”

Matthews also credited a partner who’d matched him “stride for stride” and without whom he said his job wouldn’t have been possible: his wife, Sara Matthews, an accomplished photographer whose work has been exhibited on three continents.

”I worked for Marvin for 34 years. He’s demanding. He’s challenging. He’s inspiring,” concluded Matthews. “It was not very long before I respected him. A little bit later I realized how much I admired him.”

”Today, I can say how much I love you,” Matthews addressed Shanken, who affirmed, “Tom and I will remain friends forever.”