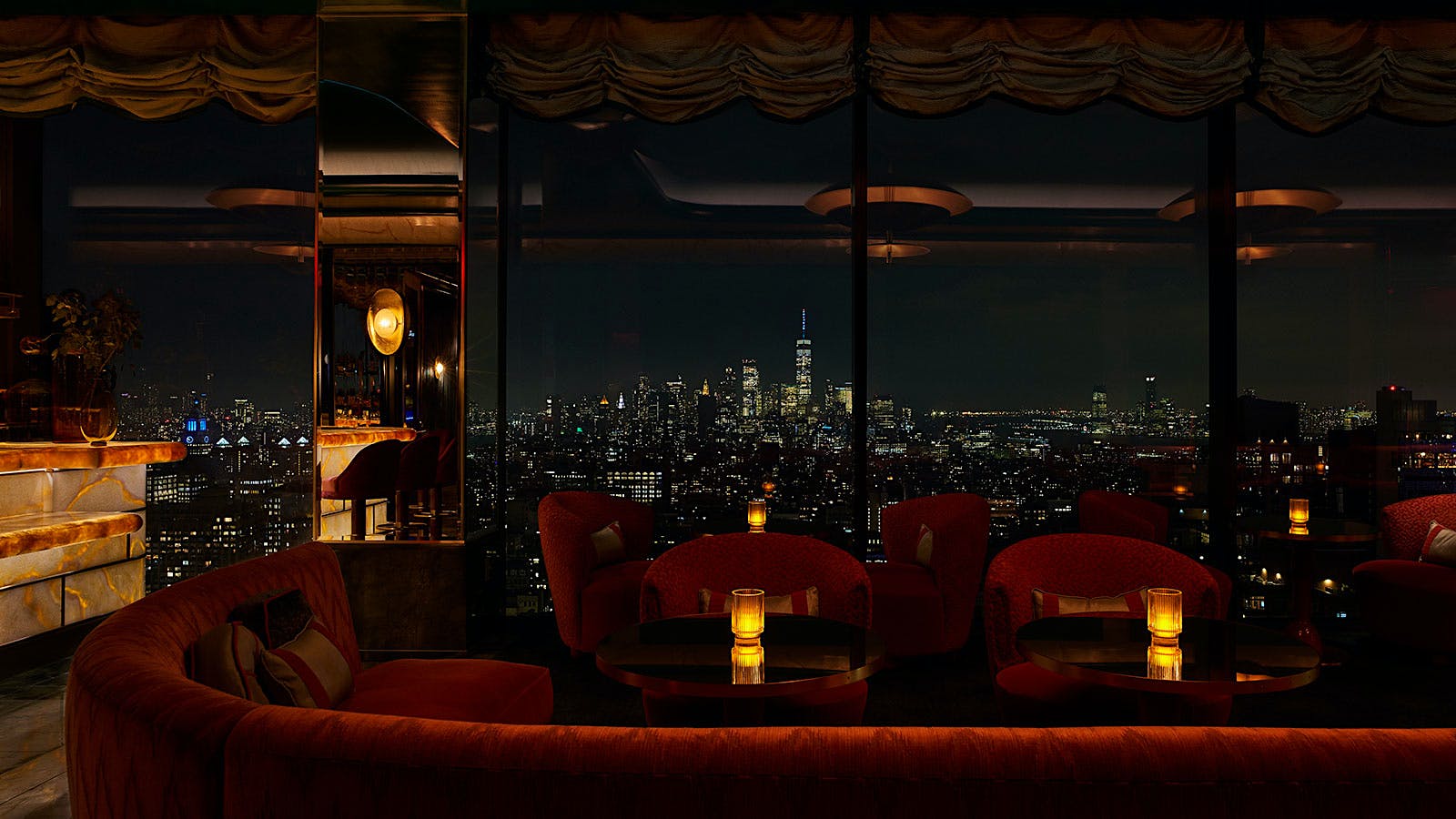 Beloved Spanish chef José Andrés is at it again. Even as his World Central Kitchen provides relief to victims of Hurricane Ian, he has opened a cocktail bar featuring inspired small plates and a compelling range of sparkling wines. Nubeluz, which opened Sept. 24 on the 50th floor of the new Ritz-Carlton New York, NoMad—where it joins Zaytinya, the Mediterranean eatery that opened in July—combines 270-degree views of lower Manhattan with a glamorous interior.

The bar, which is described as “a lightbox in the sky,” takes its name from the Spanish words for cloud (nube) and light (luz). “Nubeluz draws energy and inspiration from the great city of New York, which completely surrounds you here 500 feet in the air,” Andrés said in a statement.

Whether you want a cocktail, sparkling wine, a great Spanish red or an interesting non-alcoholic drink, Nubeluz’s bar has something to offer. (Björn Wallander)

On the wine list, Champagne and Spanish sparklers take center stage, with offerings from Raventós i Blanc, Gaston Chiquet, Charles Heidsieck, Billecart-Salmon and more. Daniel Grajewski, senior director of wine and beverage for the José Andrés Group, told Wine Spectator that the list is “a small and purposeful curation of only the best wines from around the world … we wanted the wine list to evoke a sense of luxury without being inaccessible.” Grajewski added that he plans to eventually expand the list to twice its current size.

In addition to the elegant yet cozy interior, Nubeluz is flanked by two outdoor terraces, where guests can enjoy a drink in the open air. (Björn Wallander)

For guests not in a bubbly mood (but with such a view, how couldn’t you be?), other offerings include bottlings from Vega Sicilia, R. López de Heredia, Château Léoville Barton and beyond. Whatever your chosen libation, pair it with a snack or three—highlights include a thyme and honey mustard grilled cheese, Cinco Jotas jamón Ibérico and caviar service “José’s way,” with potato chips and crème fraîche—and soak in the view, whether from the chic interior or one of two outdoor terraces.

Nubeluz and Zaytinya aren’t the only Andrés establishments slated for the new Ritz-Carlton. This winter, they’ll be joined by the first New York location of Andrés’ the Bazaar, which currently has an Award of Excellence–winning location in Miami Beach and will come to Washington, D.C., later this year—K.M.

Designed for casual catch-ups with friends, AperiBar offers plates of salumi, cheese and other shareable snacks, along with larger dishes and plenty of sparkling wine. (Courtesy of AperiBar)

“AperiBar has been a desire and inspiration of mine for many years,” Palmer told Wine Spectator via email. “Presenting Italian wines, most importantly Prosecco, and the sparkling wines of many regions is our goal. The simplicity of everything we’re doing here is sometimes the most difficult to achieve.”

“I have continued to see a shift toward a European way of eating, where we are more and more sharing small bites and lingering at the table over wine,“ Palmer explained. “I have always felt that connections are fostered over food, and traditions like Italy’s aperitivo style of dining really bring people together.” Complementing many choice ingredients sourced from Italy (imported buffalo mozzarella and olive oil, for instance), there are salumi and cheese options served with house-made ciabatta.

Corporate beverage manager Janet Pouchot oversees a wine list that explores Italy up and down the boot. The program offers more than 100 wines, including nearly 25 Proseccos and other sparkling wines, which join Pinot Grigio, Sangiovese, Barbera, Nebbiolo, Barbera and much more from leading wineries like Piedmont’s G.D. Vajra, Tuscany’s Tenuta San Guido, Sicily’s Graci and Alto Adige’s Alois Lageder. Of course, given its name, AperiBar also features many Italian-inspired aperitifs and cocktails, including Charlie’s Negroni and the Italian Butterfly (grapefruit vodka with Campari).

AperiBar’s 55-seat dining room and 30-seat bar are furnished with vintage tiles, velvet drapes and leather accents. Outdoor dining is also available. “I’m so very proud of our young, inspired team of hospitality pros,” said Palmer. “They are committed to making this a great experience for our guests in a comfortable and delicious way.”

Earlier this year, it was announced that Palmer and hospitality pro Christopher Hunsberger (formerly of Four Seasons Hotels and Resorts) would be launching Appellation, a new, culinary-focused hotel concept with emphasis on local offerings. The project is set to premiere with three properties, located in Sun Valley, Idaho, and in Healdsburg and Pacific Grove, Calif.—C.D.

The new iteration of Vetri Cucina will have the same great views of Las Vegas as the original. (Steve Legato)

After closing in March 2020 at the onset of the COVID-19 pandemic, chef-restaurateur Marc Vetri’s Vetri Cucina will reopen on Nov. 1 in its original location at Las Vegas’ Palms Casino Resort. Per Vetri, the building’s new owners, the San Manuel Band of Mission Indians, were initially looking for another restaurant for the space before making a deal to bring Vetri Cucina back.

“We were on such a great trajectory the last couple of months [before closing], we’re just restarting where we left off,” said Vetri. With 75 seats, Vetri Cucina sits on the Palms’ 56th floor and offers panoramic views of Las Vegas. A follow-up to Vetri’s Wine Spectator Best of Award of Excellence–winning Vetri Cucina flagship in Philadelphia, the Las Vegas outpost opened in 2018 and held a Restaurant Award until closing.

It will reopen with a list of about 300 to 500 wines, focusing on Italy while featuring bottles from other European countries and beyond. Vetri also plans to host winemaker dinners and other events, said the chef, noting that his team is still developing the details of the program. “For now, we want to focus on opening our doors,” he said.

Vetri is well-known for his distinctive, contemporary take on Italian cuisine, which emphasizes seasonality. The menu at Vetri Cucina Las Vegas is set to feature a mix of the chef’s classic favorites and new dishes. “We’re gonna play the hits,” he said, “foie gras pastrami, sweet-onion crêpe, spinach gnocchi, baby goat, chocolate polenta soufflé—and then leave the rest of the menu for Vetri-style seasonal dishes.”—A.R.