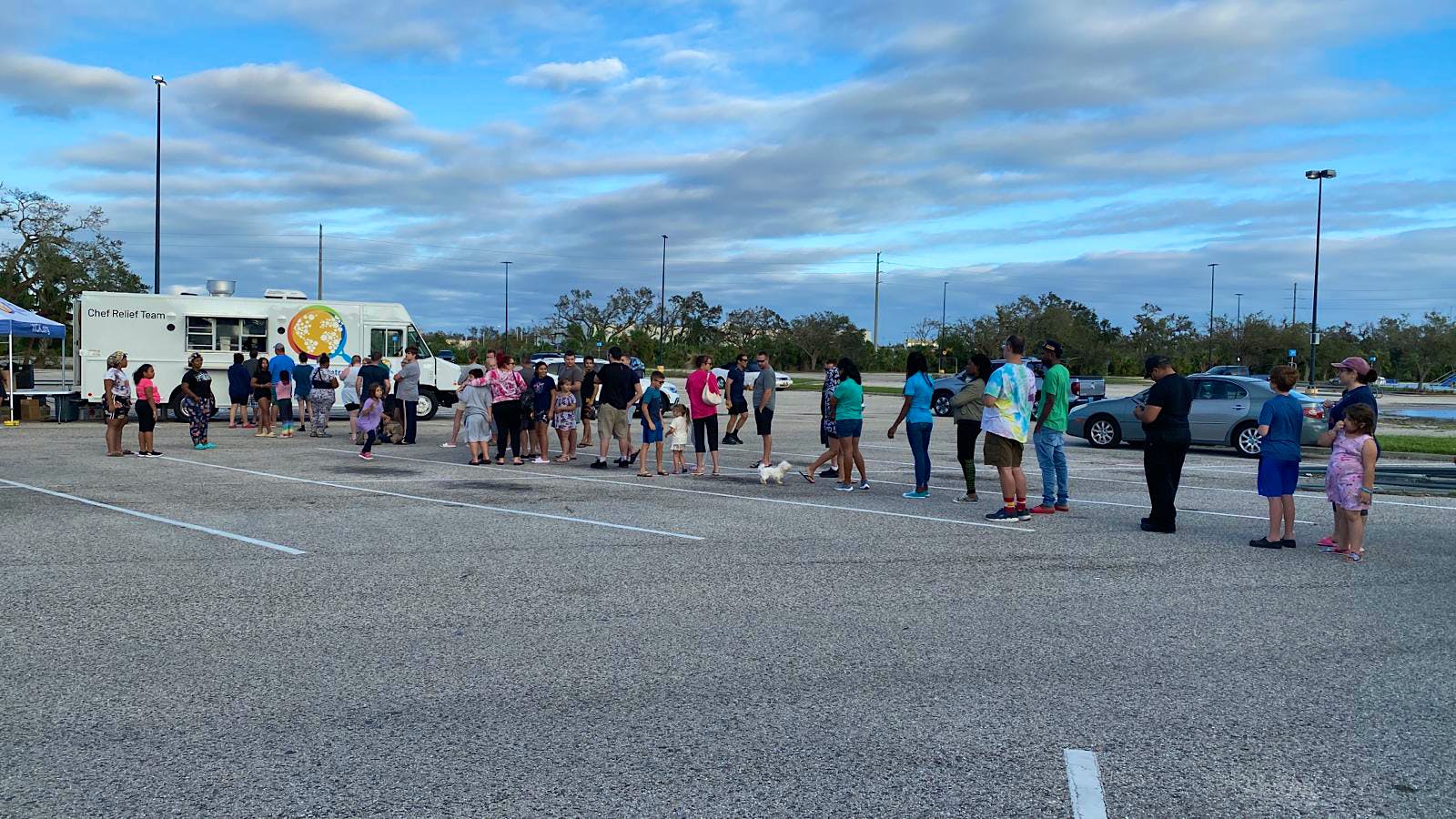 When Jacques Cariot walked into his wood-clad dining room at Bleu Provence in Naples, Florida, after Hurricane Ian had passed and saw the water had been 6 feet deep inside, it was actually a relief. He had feared the devastation to the Grand Award-winning restaurant would be worse. “When the water hits that level, everything has to be replaced,” Cariot told Wine Spectator a few days after Ian came ashore. “But we really do consider ourselves lucky.”

Hurricane Ian made landfall in Fort Myers, Florida, on Sept. 28 as a Category 4 storm, devastating the area with 150 mph winds, displacing thousands across the state and killing dozens. After crossing into the Atlantic, it made a second landfall north of Charleston, South Carolina. For restaurant owners and chefs, all they could do was prepare their dining rooms, kitchens and cellars for the worst, hoping to stave off destruction if possible. Since the storm passed, they have been working to check on staff, assess damage and help their neighbors.

This was the sixth major hurricane Cariot has been through during his time at Bleu Provence. He says that not a single bottle in his wine cellar was damaged. Cariot credits this to a cork flooring system he invested in, which saved bottles from breaking as they hit the ground. That flooring, however, will have to be torn out and replaced alongside the entire dining room and kitchen.

A few blocks away, the owners of Sea Salt, a Best of Award of Excellence winner, also came back to see their entire kitchen and floors destroyed by flooding and will need time to reopen.

Cariot, his staff and volunteers from the community have been working around the clock to fix up Bleu Provence. He’s thankful that his entire team is still with him after this disaster. “They are the most valuable asset—a restaurant is all human interaction,” said Cariot, whose wife and adult sons also work at the restaurant. “Everything is replaceable, but not the staff that has been working with us for 20, 15, 10 years. They are just priceless.”

Preparation was crucial for restaurants in the days before Ian hit. For Virginia Philip, wine director at Grand Award Winner HMF at the Breakers Palm Beach, the safety of her cellar is reliant on backup generators. She lowers the cellar temperature as far as it will go before a storm appears. “If you lose power and the backup generator fails, the coolers will remain cold for a couple of days and it’ll help preserve [the] temperature,” said Philip. “If it’s a direct hit, you know we may get flooding. Flooding does the biggest damage to wine. At that point, we may move the wine off-premise.”

While restaurants such as HMF were starting to batten down the hatches early last week, relief operations had already been flocking to Florida. World Central Kitchen (WCK), the nonprofit food-relief organization founded by chef José Andrés, started scouting locations for its operations early on Sept. 26. According to Fiona Donovan, director of relief operations for WCK, the organization was in a crunch to prepare for a potential onslaught of people in need.

“We got here Monday [two days before landfall] and really focused on getting in all of our products, all of our water, our cooking equipment, so that we could be prepared to hit the ground on Thursday,” said Donovan. “There’s still shock among the communities and just disbelief that this happened to Florida.”

WCK is known for being a source of aid and comfort to communities around the world in drastic times. By Friday, two days after the storm arrived, the WCK team had roughly 30 volunteers preparing 30,000 meals per day to distribute to damaged areas such as Sanibel Island, where buildings and vital bridges were destroyed.

To help reach more people, WCK is collaborating with dozens of restaurants and food trucks across the Tampa area to cook and distribute meals. Michael’s on East, a Best of Award of Excellence winner in Sarasota, Florida, joined WCK to make 2,000 to 4,000 meals per day for neighbors in need. Michael Klauber, co-owner of Michael’s, said the building the restaurant is located in lost a large part of its roof, damaging offices but, thankfully, not the kitchen, so he decided there was no reason for him not to provide aid.

Klauber is also reaching out to restaurants across his city to assess damage. The Sarasota-Manatee Originals, a group of local restaurants he co-founded, are working to make sure damaged establishments have the resources they need to return to service. “I’ve lived in Sarasota for over 50 years and this is the worst storm that we’ve ever had,” said Klauber. “It’s scary when it’s coming. When you’re in the middle of it—it’s battening down the hatches. But our community works together and helps each other in the aftermath.”

While some restaurants are in the process of rebuilding or have mobilized to help with relief efforts, many across the area were not affected and were able to return to normal service in the days afterward, happy to feed locals looking for a meal and company.

At Bleu Provence, Cariot says that it may take more than six weeks for the restaurant to return to service, and that estimate is entirely reliant on the supply chain’s speed in delivering new furniture and equipment. “We’re going to be back shinier and better than ever,” he said.

The Cariot family of Bleu Provence—right to left, chef Lysielle Cariot, her husband and the wine director Jacques and their sons Kevin and Clement—need to gut their dining room and rebuild, but they are dedicated to staying in Naples. (Andrew Meade)