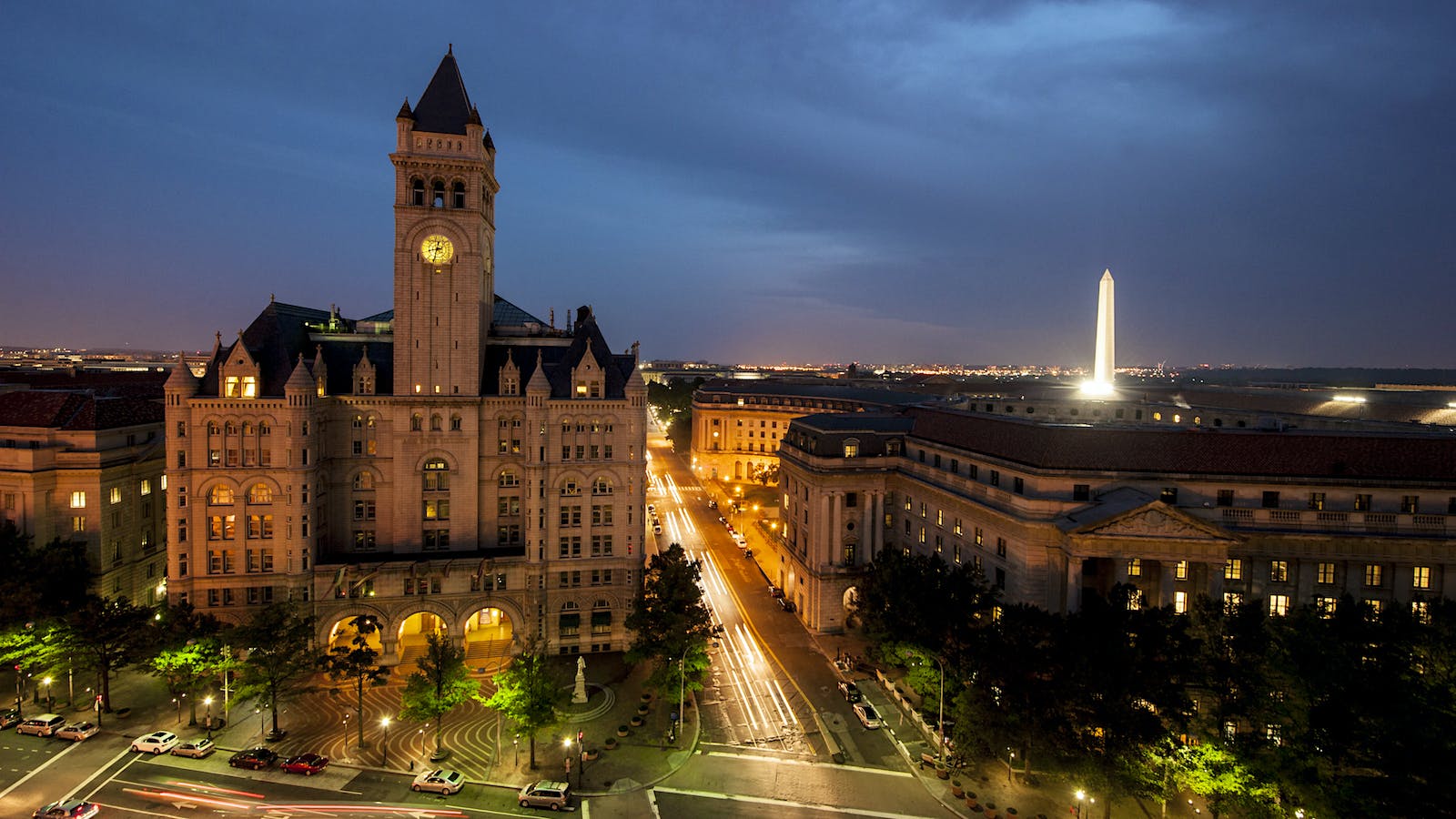 “I first dreamed of opening a restaurant at the Old Post Office back in 1993 when I first came to D.C.,” said Andrés in a statement. “Nearly three decades later, I am building that dream into a reality, and couldn’t be more excited to bring my beloved Bazaar restaurant right here to D.C. in this beautiful historic location.”

Andrés premiered his Bazaar concept in 2008 at the now-shuttered Los Angeles location, before opening new spots in Miami and New York, along with Bazaar Meat locations in Las Vegas and Chicago. (Another is set to open in downtown L.A. in 2022.) Across these restaurants, the chef and his team explore traditional and more contemporary takes on cuisine from Spain (particularly tapas) and farther abroad, offering everything from jamón Iberico and patatas bravas to pork belly bao buns and a bagel-and-lox cone.

Spain is a central focus on Bazaar wine lists as well, which feature the likes of Rioja, Priorat, Navarra rosé and bubbly from Josep Maria Raventós i Blanc. These programs are rounded out with bottles from other regions, including Sonoma, Burgundy and Bordeaux.

The latest Bazaar has been designed by Spanish firm Laìzaro Rosa-Violaìn, taking over a space previously occupied by David Burke’s BLT Prime. The restaurant will sit within one of D.C.’s most historic edifices. Built in the Romanesque Revival school, the Old Post Office served as D.C.’s general post office for about 15 years beginning in 1899. It is now operated as a hotel—as of this month, the Waldorf Astoria Washington, D.C.

Andrés had been set to open a restaurant in the Old Post Office several years ago, when it was Trump International Hotel. (The building was leased to the Trump Organization by the U.S. government’s General Services Administration.) The restaurant, Topo Atrio, was slated for a 2016 opening. However, in summer 2015, Andrés pulled the project due to controversial comments made by Trump Organization owner and then–presidential candidate Donald Trump about Mexican immigrants in the U.S. Chef and television personality Geoffrey Zakarian also pulled his planned restaurant from the hotel for the same reason.

The Trump Organization sued Andrés and his ThinkFoodGroup for breach of contract, reaching a settlement in 2017. In 2021, the organization agreed to sell its lease on the Old Post Office building for $375 million, and it is now operated by investment manager CGI Merchant Group and Hilton Hotels & Resorts.

“A lifelong learner with a passion for U.S. history, the opportunity for José and our team to open a flagship restaurant at this iconic site is incredibly meaningful,” said ThinkFoodGroup and José Andrés Media president Sam Bakhshandehpour in a statement. “Bringing the Bazaar to D.C. is an important anchor for us, and our partners, who are locally based and community-minded.”—C.D.

Southern California meets the Mediterranean in the decor of Mother Tongue, which aims to be both healthful and enticing. (Angelo Clinton)

“It took me a minute to wrap my head around what this concept would look like,” admitted Jeremy Shanker, corporate wine director for the Mina Group.

That concept is the latest restaurant from the Mina Group, Mother Tongue, a partnership with the RSG Group (the company behind fitness and lifestyle brands such as Gold’s Gym). Situated on the top floor of a five-story building in downtown Hollywood, Mother Tongue, which opened June 20, operates in conjunction with (but as a separate entity from) fitness club Heimat, which occupies the first three floors.

Though connected to the fitness club, Mother Tongue does not feel like a place you’d stroll into after an arduous workout. The vibe is distinctly L.A., with its industrial ceiling and rooftop terrace offering panoramic views of the Hollywood Hills, but terrazzo and Murano glass add Mediterranean flair. The main dining room is bright and airy, with floor-to-ceiling windows allowing the natural light to enliven the shades of coral and ochre, with pops of green from tropical-looking indoor plants. The 1,500-square-foot terrace keeps a similar color scheme, adding faded emerald to the mix.

Being a member of Heimat provides eating and drinking perks. The top floor also includes a members-only pool with food and beverage service. “L.A. rooftop bars aren’t always known for the best wine selection,” said Shanker, noting that bottle service will include everything from grower Champagne to a selection of wine in cans, including offerings from Broc Cellars and Sans Wine Co. “We’re trying to build something pretty unique in L.A. The audience is bigger than just the exclusive club below us.”

Chef Fernando Darin, a Patina Group alum, crafts a menu with a global bent while being plant-forward, wholesome and built around eating thoughtfully. Every menu item is marked with a letter corresponding to a key at the bottom of the menu indicating dietary considerations such as keto, plant-based or anti-inflammation. “Guests who attend the gym are very mindful and have strict dietary guidelines, and our menu helps accommodate those while still being delicious,” said Shanker.

The beverage list also takes a health-conscious approach, with alcohol-free and low-alcohol options such as sparkling cold-brewed tea and hard kombucha. Around half of the 100-bottle wine list is devoted to “natural wine” (defined by the restaurant as sustainably grown, fermented with native yeasts and made without additives, including sulfites), which Shanker said is structured to encourage exploration. “I believe in giving the guests what they want, not telling them what they want. If a [natural] wine is made well, it likely won’t taste any different [than its more conventional counterparts]. Some of the best wines are made natural; the rest on our list, while not natural, are still made with that approach in mind.”

Shanker says the reserve selection, titled IYKYK (“if you know, you know”), puts true benchmarks of top regions on display. “If you know Chablis, you won’t be surprised to find that Dauvissat is the Chablis we have. But the list is also an invitation to the person who wants to know what great Chablis tastes like; we’re putting all the secrets on the page.”—A.R.

Chambers is aiming for a more accessible, neighborhood feel in its wine and food than Racines NY, which it replaces. (Kate Previte)

Diners and wine lovers still mourning the closing, nearly a year ago, of Racines NY, rejoice: Pascaline Lepeltier and her team have reimagined the Tribeca space as Chambers, which opened June 15. Lepeltier, the beverage director and a partner in the restaurant, is known for her commitment to sustainability and stewardship. Those values shine in the new restaurant, less a Racines reboot than a fresh start.

Though the physical location is the same, Lepeltier and her team have carefully crafted the space to be cozier, with gentler lighting and ample curves; the goal is to become a neighborhood go-to. They’ve added a communal table, where they hope strangers will become friends over the shared pleasures of good food and wine. Even the name reflects the change in tenor—the restaurant is on Chambers Street—and while Racines NY was an offshoot of the renowned Parisian bistro, Chambers keeps things more local and down to earth.

“We wanted to rethink the business model … to ensure we could give the staff a better lifestyle,” Lepeltier told Wine Spectator. To that end, they’ve reduced the number of tables, seating 55; streamlined the menu and service; and provided expanded benefits, predictable hours, ample vacation and increased wages. Guests who opt to sit at the four-seat kitchen counter for a view of the action are charged a $25 booking fee, which goes straight to the kitchen staff.

That unfussy, streamlined approach translates to the wine program, with sommelier Ellis Srubas-Giammanco a driving force behind its new direction. Lepeltier said that, though she was proud of Racines’ list (2,400 selections when it shut its doors), it could lean geeky and “scare people from coming.” She also wants to “rebalance” the relationship between the kitchen and the wine program. At Racines, she said, the elaborate, expansive list sometimes risked outshining the food; at Chambers, she plans to cut the list down to 600 to 800 wines to make it a less intimidating, friendlier match for chef Jon Karis’ elegant, energetic cooking. At opening, the one-page menu offered dishes including veal sweetbreads, black sea bass with artichokes, Berkshire pork loin with summer squash and ricotta cavatelli with ramp pesto and pistachio. Sides are simple, yet distinguished, such as asparagus with white anchovy and broccolini with preserved lemon.

Chambers’ list—for now, predominantly comprising wines from the Racines cellar—walks a fine line between pleasing traditional wine lovers and the vanguard of natural wine and pét-nat enthusiasts. The style is hip but humble—approachable for casual wine drinkers but with plenty to interest even the savviest enophile. There’s particular strength in Jura and the Loire, Lepeltier’s homeland, and some welcome quirks—the opening list offers only two Napa Valley whites, both Chenin Blancs, yet boasts a Chardonnay from Texas. A fascinating cider and co-ferments section will appeal to the adventurous drinker, as will the selection of ancestral method sparklers and skin contact bottlings. The list is producer-focused; many sections have titles like “Vignerons of Vermont” and “Vignerons of Gevrey-Chambertin.” Hybrid and native American varieties will play an increasingly prominent role: The opening list offers a glass of Finger Lakes Concord from Chëpìka, the wine project Lepeltier runs with Nathan Kendall, for an agreeable $9.

“You don’t need me to drink DRC,” Lepeltier said. Indeed, the list currently has fewer than a handful of grand cru Burgundies. She plans to curate the offerings with an eye toward approachability, without sacrificing her passion for highlighting small, family-run producers who farm responsibly and showcase their terroirs. Lepeltier is excited about Chambers’ draft system, which showcases local beverages while cutting down on shipping costs—and has even committed to carrying by-the-glass wines brought to New York by sailboat. And she has assembled a nearly comprehensive selection of Chartreuse.

Chambers also offers an impressive range of low- and non-alcoholic options to engage non-drinkers and promote a healthier culture around drinking in the restaurant industry. Don’t miss the ginger beer, fermented in-house following a recipe by bar consultant Cristian Molina.

For the fall, Lepeltier plans special wine events that explore unexpected connections between wine and topics such as music or philosophy. Chambers is open Monday through Friday during the summer, with the first seating (reservations required) at 6 p.m. and the second (walk-ins welcome) at 8 p.m. After Labor Day, the restaurant will be open Tuesday through Saturday.—K.M.