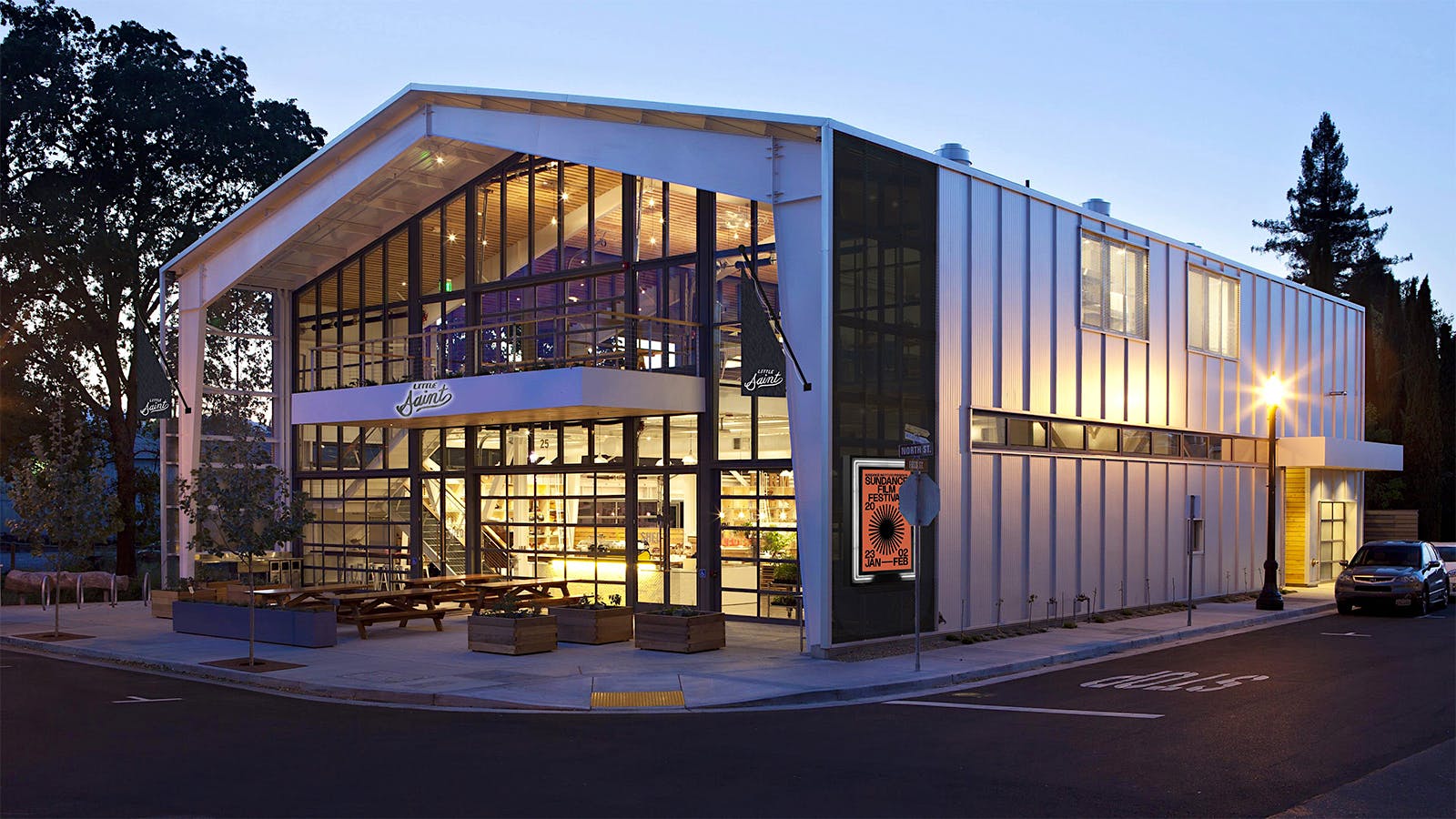 Little Saint is operated by the Connaughtons’ management company, Vertice Hospitality Management, with Jenny Hess as the restaurant’s director, Akeel Shah as the general manager and Alex Sarovich, a SingleThread veteran, as the wine director.

For the completely plant-based menu, chef Bryan Oliver is using ingredients sourced from Little Saint’s farm, as well as SingleThread’s farm and other local producers, emphasizing how a restaurant can help maintain a healthy ecosystem that delivers quality produce. The results, many shareable, are dishes like cauliflower biryani with basmati rice, potato–green garlic soup, mokum carrots with shaved red cabbage and carrot cake with walnuts.

Sarovich’s 300-label list aligns closely with Little Saint’s meatless menu and focus on eco-friendly practices; she checked that every wine has been made from grapes farmed at least sustainably. Little Saint’s environmental ethos was, in fact, one of the reasons Sarovich wanted to join the restaurant’s team.

“[The Ubbens] really empowered me to build a program that I felt would encompass everything that we all are passionate about, from farming to highlighting female and minority winemakers, and sourcing wines that offer a sense of place,” Sarovich told Wine Spectator.

Sonoma features prominently in the 3,560-bottle inventory, not surprising given Little Saint’s location, with additional strengths in other Golden State regions like Mendocino, Central Coast and Napa Valley. Beyond California, the program spotlights Champagne, Burgundy and Loire Valley, as well as Italy. Sarovich’s aim is to feature wines and categories that are loved by local winemakers in the Healdsburg area, and guests can expect bottles from wineries like Sonoma’s LaRue, Oregon’s Niew Vineyards and Champagne’s Gamet. Natural wines and skin-contact wines are featured too. Little Saint’s cocktail program, led by Matthew Seigel, will also emphasize sustainability, as well as local ingredients.

“Little Saint is a community gathering place,” Sarovich explained. “It’s an elevated wine experience, but in a super-casual, communal way.” The wine director is hoping that guests will be able to move past traditional wine-drinking practices thanks to Little Saint’s vegetable-based menu, easily shifting between reds and whites over the course of the meal. “What I would love to see is a bottle of white and a bottle of red at every table,” she said. “‘Let’s pass it around, let’s have a glass of each with every dish that comes by.’ Just having fun.”

Little Saint’s menu, much of which is shareable, encourages experimentation and flexibility with wine pairings. (Emma K. Morris)

Based in a 10,000-square-foot space that formerly housed a restaurant-market called Shed, Little Saint will also premiere with a café, a grocery called Little Provisions and a wine shop also overseen by Sarovich. About 80 percent of the restaurant’s list will be available at retail so diners can take home a bottle they particularly enjoyed. Little Saint will host wine tastings, visits from guest chefs, book signings and live music as well. Some events will be held with nonprofit Saint Joseph’s Art Foundation in support of sustainable viticulture and agriculture.

“We live here, farm here and are part of the community of amazing winemakers, farmers, and artisans,” said Kyle Connaughton in a statement. “We really wanted to reflect that and create exciting offerings for our local community and at the same time share with the visitors how special this place that we call home is.”—C.D.

Silver Oak, which debuted in 1972 with a partnership between Ray Duncan and winemaker Justin Meyer, keeps evolving with the times; its wineries in Napa and Sonoma have both earned LEED Platinum certification, a top honor for eco-friendly buildings. (Courtesy of Silver Oak)

Fifty years is a significant milestone. So when the Duncan family of Napa and Sonoma’s famed Silver Oak started thinking about celebrating their big anniversary, they decided to take their party on the road and celebrate with their fans at some of the nation’s most exciting restaurants, helmed by culinary stars.

The 12-city tour kicks off April 24 in Los Angeles at chef Nancy Silverton’s Wine Spectator Award of Excellence-winning Osteria Mozza. “When we first started talking about a 50th-anniversary dinner series, we knew we wanted to open with Nancy. Not only is she an icon, but she and the team at Osteria Mozza demonstrated incredible leadership, perseverance and resiliency over the last couple of years,” said Silver Oak CEO and proprietor David Duncan.

The menu pairs offerings such as gnocchi with duck ragu and veal stracotto with funghi misti with bottlings from the Duncan family wineries, including Silver Oak, Twomey, Ovid and Timeless. “Silver Oak Cabernets were really a California treat for me, back in the day and now,” said Silverton, recalling a memorable wine shared with a significant other shortly after Silver Oak co-founder and winemaker Justin Meyer passed away in 2002. “He brought along a 1985 Silver Oak Bonnie’s Vineyard, and let’s just say it was the right wine to bring. It’s so nice to know the Duncan family has upheld the strong, proud tradition of world-class wines,” she added.

Osteria Mozza is known for Nancy Silverton’s Italian cuisine and a wine list strong in seledctions from Piedmont, Tuscany and other parts of Italy. (Courtesy of Osteria Mozza)

After Mozza, the Silver Oak crew will journey to New York, Chicago and Nashville before returning home for two local dinners, including one with chef Christopher Kostow (whose Grand Award–winning Restaurant at Meadowood was destroyed in the 2020 Glass fire) at his Charter Oak location in St. Helena. More than wine will be flowing, as Silver Oak teamed with local Russian River Brewing Company for a special beer. “The grape-pomace beer collaboration is one of the more exciting hidden gems on our 50th-anniversary tour,” said Duncan, explaining that the brewery took 1,000 pounds of pomace and fermented a beverage that blurs the lines between wine and beer.

The official celebration on Aug. 6 will include the release of 50th-anniversary magnums and the debut of the 2018 Silver Oak Alexander Valley Cabernet Sauvignon. The day’s events will combine Silver Oak wines with live music from soul musician Lee Fields and bites from Grand Award–winning SingleThread Farms, Little Saint, Best of Award of Excellence–winning Luce in San Francsisco, AlaMar in Oakland and the Silver Oak culinary team.

Then it’s back on the road with stops at Award of Excellence–winning Bell’s in Los Alamos in Santa Barbara County and events in San Francisco, Minneapolis and Austin, concluding in New Orleans at Nina Compton’s Compère Lapin. “When we first created our shortlist of chefs and restaurants, we wanted to showcase a wide range of chefs who are pushing American food culture forward and introducing new pairing concepts for California wines,” said Duncan.—A.R.