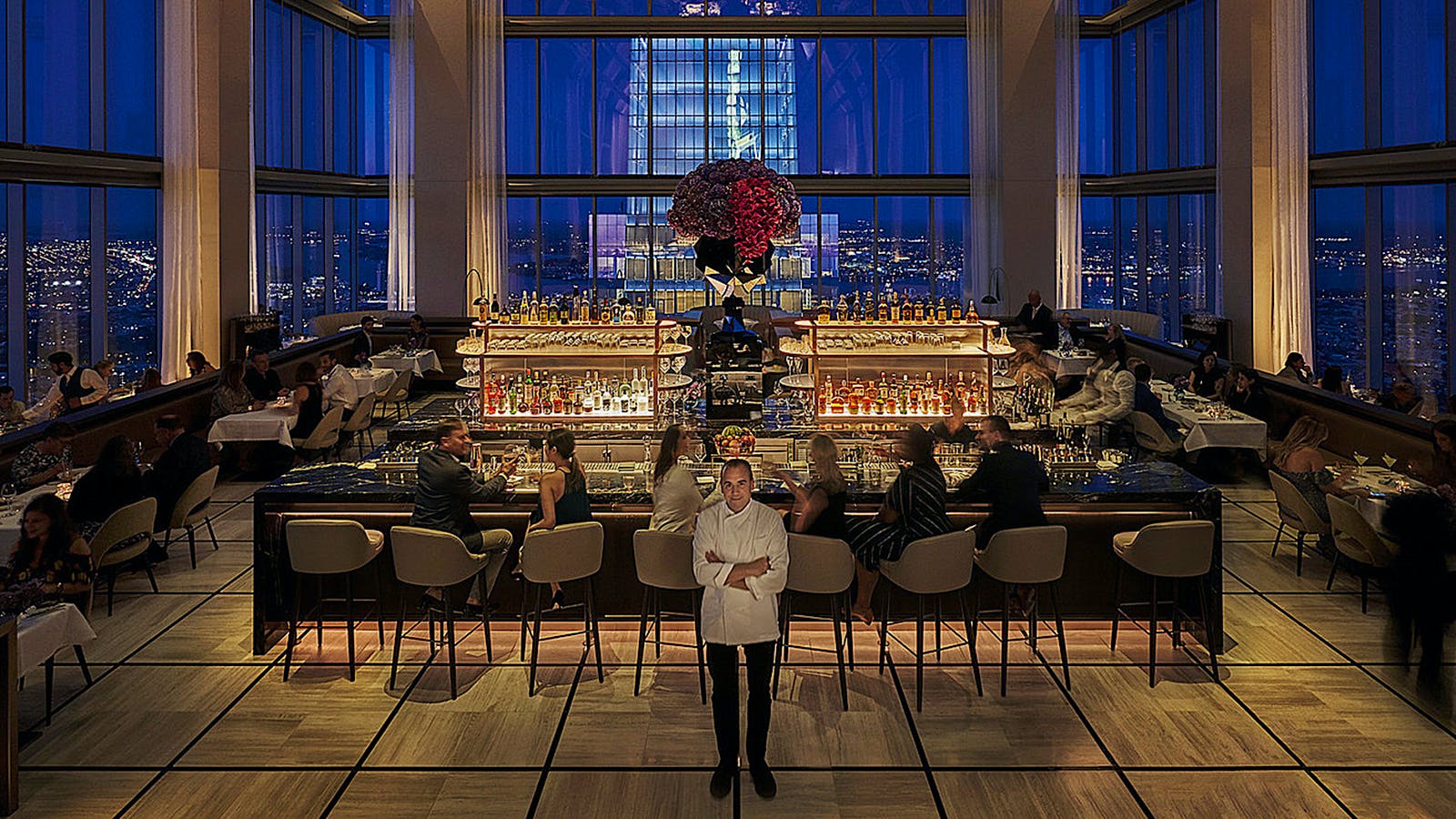 2022 is shaping up to be a big year for acclaimed Alsace-born, New York-based chef and restaurateur Jean-Georges Vongerichten, who is expanding his restaurant group within the United States and to Japan and Monaco. Following a late 2021 entry into Nashville, he reopened Jean-Georges Philadelphia, a Wine Spectator Award of Excellence winner in the Four Seasons Hotel at Comcast Center, on March 10.

Similar to the chef’s Grand Award–winning flagship in New York City, the Philadelphia location now offers a six-course tasting menu, from new chef de cuisine Cornelia Sühr, in a slightly more relaxed environment, with views across the city from its perch on the 59th floor. The wine program, now overseen by wine director Dawn Trabing, continues to offer a 300-selection list backed by a 4,000-bottle cellar, as it did before the temporary closure in 2020. Wine pairings are available for the menu, and a Champagne and aperitif cart has been added.

In May, Vongerichten will debut a new restaurant in Monaco inside the Maybourne Riviera, with a wine list highlighting selections from France’s Provence region, along with Old World classics. That will be followed in summer 2022 by a new tasting-menu experience in Kyoto at the Shinmonzen luxury boutique hotel from hotelier Patrick McKillen.

The slate of openings will be capped by the summer unveiling of the Tin Building, a large food hall and retail destination in Lower Manhattan. The project, nearly 10 years in the making, takes inspiration from the rich history of the old Fulton Fish Market, reconstructing a new version of the 1907 building on Pier 17 at South Street Seaport.

The House of the Red Pearl, which will feature Chinese cuisine and be overseen by Jean-Georges Vongerichten, will be one of the featured dining venues at the new Tin Building food hall. (Courtesy of Roman and Williams Buildings and Interiors)

The food hall’s concepts will include the plant-based Seeds & Weed restaurant; the French-inspired T. Brasserie; a sushi bar; the Frenchman’s Dough, which focuses on pizza and pasta, and the House of the Red Pearl, a restaurant focusing on Chinese cuisine. Each venue will have its own wine list, but they will generally be on the smaller size, curated to match each cuisine. There will also be a variety of grab-and-go options for those looking for a quick bite.

Jean-Georges wine director Rory Pugh notes that the diversity of the forthcoming restaurants allows the team to create engaging experiences tailored to each location and its expected guests. “One of the most exciting things is realizing how open some people’s minds are,” Pugh told Wine Spectator. “People want to explore, they want to taste things that are delicious and there’s a whole giant world of wine out there. When we are able to focus in and pair something … it suddenly expands our horizons.”

William Edwards will be expanding Manhatta’s wine list, which already has strength in Burgundy bottlings and deep verticals of California classics. (Giada Paoloni)

Following its closure at the beginning of the COVID-19 pandemic, Manhatta, which held a Best of Award of Excellence at that time, reopened March 17. Known for its lively atmosphere and stunning 60th floor views, the Financial District restaurant—part of Danny Meyer’s Union Square Hospitality Group—welcomes a new beverage director, William Edwards.

“It was a great list before,” Edwards told Wine Spectator. “Moving forward, we’re looking to make this an internationally renowned wine-drinking destination. I think with the quantity of wine we have on stock, we’re off to an incredible start.”

Edwards arrives from within the USHG family, having previously worked as a sommelier at Meyer’s Best of Award of Excellence–winning Gramercy Tavern. He is also an alumnus of several other prominent New York names, including Carbone and Grand Award winner the Grill.

Edwards describes Manhatta’s new wine experience as “Elegant and professional, but [with] kind of ‘the life of the party’ vibes.” The program sits at about 2,000 labels, with particularly strong showings from Burgundy and Napa Valley. With 18,000 bottles on site, there are deep verticals of wines like Beaulieu Vineyards Georges de Latour Private Reserve, Joseph Phelps Insignia and Dunn Cabernet Sauvignon Howell Mountain.

But it’s very much a global list, also focusing on Southern Hemisphere regions like Australia, South Africa and New Zealand. The by-the-glass list, with 20 wines, highlights other regions in France, California, Italy and beyond, including several sparkling options. Manhatta has also introduced a robust new cocktail program from head bartender Cameron Winkelman.

For now, guests will be able to pair their drinks with options from Manhatta’s bar menu, which will be the only menu offered in the main restaurant until a new dining program launches this spring. (The restaurant’s new executive chef will be announced soon.) Edwards notes that several hundred more wines may be added to the list for the full reopening. For now, the bar menu features dishes such as bonito Caesar crudité, a lobster roll with tarragon beurre blanc and fried chicken with scones.

“When Manhatta first opened in 2018, we asked ourselves ‘Who ever wrote the rule that a fun, neighborhood place couldn’t also have a great view?’” said Meyer in a statement. “After two profound years, we’re proud to renew that commitment and welcome guests back to Manhatta—reinvigorated and evolved.” Manhatta is opening a new events space, as well as the Bay Room Bar, which will offer more seating and views. Changes have been made to Manhatta’s branding, design and furniture as well.

“We’re giving [guests] exemplary Danny Meyer–style hospitality,” Edwards explained, “and we’re using our personalities to make sure people have a good time while also being graceful, elegant and professional in our wine service.”

The historic El Quijote has been renovated, though its signature mural remains, and given a new menu and a wine list overseen by Claire Paparazzo. (Eric Medsker)

El Quijote has reopened at New York’s landmark Hotel Chelsea, after the hotel closed in 2018 due to renovations. (It is set to fully reopen in summer 2022.) With a wine program overseen by Claire Paparazzo, a veteran of Wine Spectator Restaurant Award winners such as Blue Hill and Best of Award of Excellence winner Dirty French, the restaurant, founded in 1930, offers a glimpse of New York’s colorful dining past.

Along with the hotel’s other food and beverage spots, which include a new French-American bistro and the Lobby Bar, El Quijote is now operated by Sunday Hospitality and partner Charles Seich. Sean MacPherson, the hotel partner in charge of the restaurant’s renovation, and his team have preserved much of El Quijote’s memorable interior and 1930s features, including its original bar and its distinctive mural depicting Don Quixote, the restaurant’s namesake.

Offering 45 labels and an inventory of more than 1,000 bottles, Paparazzo’s wine program focuses primarily on Spain, offering the country’s traditional varieties like Tempranillo and Garnacha Blanca, as well as natural wine, skin-contact wine, Cava, sangria and more. “The current list takes one out of familiar regions and is more of a conversation about the weight and texture of the wine,” Paparazzo told Wine Spectator. “It may be a departure from one’s typical ideas of Spanish wine, but rooting for the more boutique farmers has always been my passion.” These wines are joined by a new cocktail program from Brian Evans, the director of bars for Sunday Hospitality.

“Our hope is that there is something for everyone, and for this to be a place of enjoyment for all,” Paparazzo said. “Being inclusive is the key to a rounded program. I am trying to filter through my palate a wide variety of experiences, curated like the art that hangs on the walls around us.”

The main dining room, once regularly visited by the likes of Andy Warhol and William S. Burroughs, now seats a scaled-down 60, and there are plans to open a semi-private dining room in the near future.

“Our goal is to provide the neighborhood with a restaurant where everyone is welcome to celebrate and with no pretense whatsoever,” said Seich. “We are serving guests that have been dining at El Quijote for decades, as well as a new crowd that has never experienced the space before.”