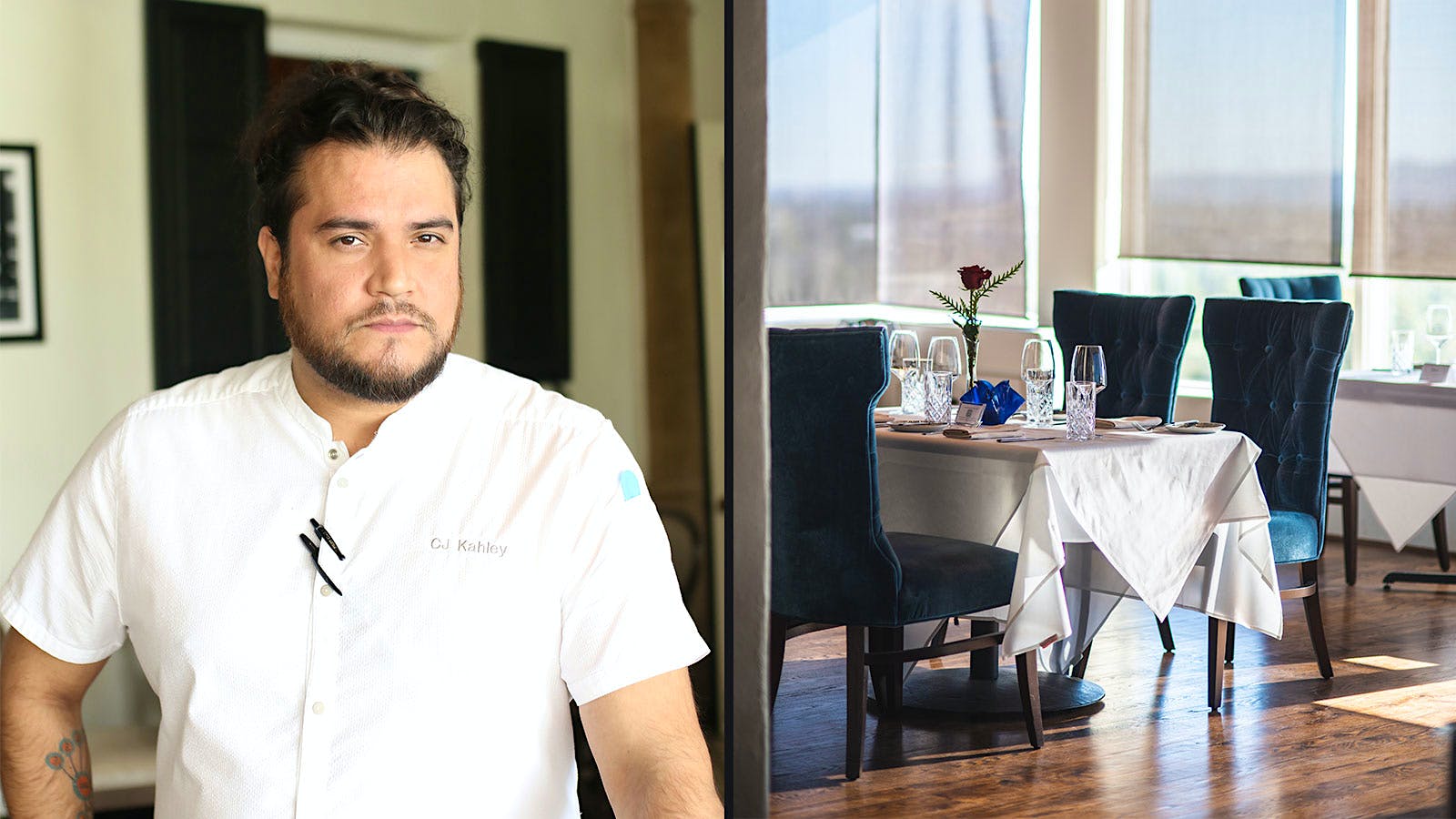 Kahley cites the history of the Wrigley Mansion, which opened in 1930, as a big draw for joining the team. “Geordie’s has been building a following since it opened, and I wanted to challenge myself to not only keep the existing standard but to run with it and continuously improve things,” Kahley told Wine Spectator. “Chef Christopher Gross set the bar high, so I wanted to see where I could take the menu and what my story here could be.”

Kahley will follow this with new additions to the menu like caramelized scallops and octopus fritto, a dish made with squid ink tempura, fennel purée and salsa peperoncino. Previous menu highlights are still available like Prime steak frites, whole branzino and creste di gallo pasta served with duck confit and baby kale.

The wine program, which boasts 1,200 selections, has also seen some recent updates. Led by wine director Paola Embry, the Best of Award of Excellence–winning cellar was recently expanded from 7,500 bottles to 12,000 bottles that span regions like California, France, Italy, Bordeaux, Burgundy, Champagne and Spain.—Taylor McBride

Gnocchi is on the menu at the Tuscan-influenced Felice in Brooklyn Heights. (Courtesy of Felice)

“We have always felt that Brooklyn Heights would be a perfect neighborhood for Felice,” partner and chief operating officer Jacopo Giustiniani told Wine Spectator via email. “When the space at 84 Montague Street became available, we knew it was a perfect fit.”

Giustiniani’s 140-label wine list is packed with wines from up and down the Italian boot, from Franciacorta to Etna reds. “We carry a variety of producers, many which follow organic and sustainable agriculture methods,” Giustiniani said. The program’s heaviest focus is on Brunellos, Chianti Classicos, super Tuscans and Nebbiolos. Italian wine lovers will recognize many celebrated names among the 1,000-bottle inventory, including Antinori, Avignonesi, Tenuta San Guido and Borgogno. The restaurant also offers its private Tuscan label, as well as 24 wines by the glass. “We hope to offer a wide range of options to our guests, and that all of our clients are able to find a wine on the menu they can enjoy for any occasion,” Giustiniani said.

Like the other Felice locations, Felice Montague’s cuisine is inspired by Tuscan cooking. Chef Fausto Ferraresi prepares a menu centered on locally sourced ingredients and products imported from Italy for dishes like arancini, ricotta crostone and many distinctive pastas. The location is premiering a few new plates too. “I worked closely alongside [Ferraresi] to add special menu items that are unique to this location,” said culinary director Iacopo Falai. These include pasta al forno (baked pasta) dishes like penne ai quattro formaggi, as well as gnocchi alla Sorrentina and chicken pizzaiola.

Felice Montague is located in a 1930s art deco building and features preserved design elements like colorful tile and geometric details across the restaurant’s open floorplan. These mingle with Tuscan touches added by designer Samantha Tannehill. Looking ahead, SA Hospitality will be opening a new Sant Ambroeus in East Hampton, N.Y., in the spring, and a new Felice location in West Palm Beach, Fla., in the summer.—Collin Dreizen

According to an announcement on Intersect’s website, the restaurant’s closure was unrelated to the COVID-19 pandemic. The announcement notes that the restaurant was able to pivot to a to-go model during indoor-dining shutdowns and has been solidly booked for reservations since reopening. “Intersect was intended to enhance the Lexus brand in an impactful and meaningful way, and it did just that,” it read. “We are proud of what we have accomplished, and we consider Intersect by Lexus NYC a great success.”

In its main dining room, Intersect hosted a diverse roster of chef residencies for four to six months each. Guest chefs included names like Victoria Blamey of New York’s Gotham Bar & Grill, London-based French chef Gregory Marchand and New Orleans’ Nina Compton. Beverage director Andrea Morris kept the wine list around 100 selections, but rotated the offerings to complement the cuisine of each residency. Value was a consistent priority for the wine program, which listed plenty of bottles under $100 and a robust by-the-glass page.

Though there are no further details on a future iteration of the retail-restaurant hybrid, the announcement also shared that “the Lexus brand will continue to develop creative and innovative lifestyle experiences … for years to come.”—Julie Harans