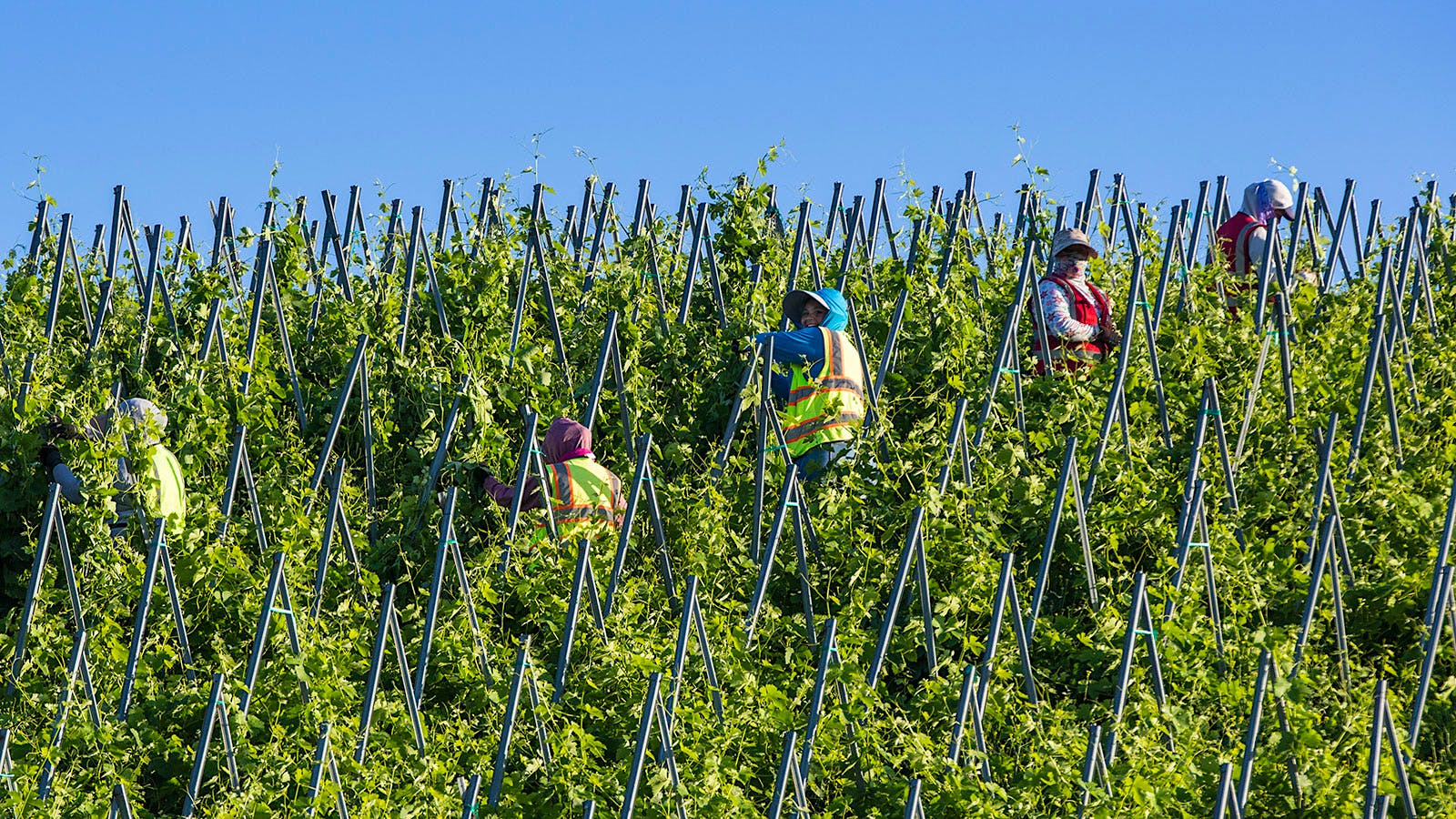 In the fall of 2020, the grapes in Alison Sokol Blosser’s vineyards were ripe—and she had no one to pick them.

Pandemic-related travel restrictions meant that none of her international harvest interns had arrived, and the local labor pool in Oregon’s Yamhill County, where the winery is located, was essentially nonexistent. “We had to get the grapes off, so I pulled my kids out of school and my nephews and my parents—who hadn’t picked grapes in 30 years—all worked in the vineyard.”

Grappling with a similar labor shortage in 2021, Sokol Blosser, like so many desperate vintners across the U.S., turned to farm labor contractors for hiring needs, which drove up seasonal costs exponentially. “We need solutions; the labor crisis is not going away,” she told Wine Spectator.

The labor crunch is being felt across California’s $43.6 billion wine industry too. “Transportation was our biggest challenge this year; we somehow managed to get fruit picked, but we couldn’t get it hauled,” said Bob Torkelson, president and COO of Trinchero Family Estates, one of California’s largest wine companies, farming over 10,000 acres of vines. “The last few harvests have seen the perfect storm.” Fires and other weather challenges have shrunk grape-picking windows and seasonal workers couldn’t travel from the Southern Hemisphere due to travel restrictions.

But all these challenges have merely exacerbated a chronic labor problem that has been worsening for more than a decade: Workers are leaving the wine industry for good. “Vineyard work is extremely difficult and people have a lot of options today,” Torkelson said. “We’ve seen farm workers leave for jobs in the service industry, construction and at huge delivery centers like Amazon.”

Winegrowers, who rely on seasonal workers as well as year-round labor to tend vines, are being forced to adapt. Some are replacing hands with machines, some are trying new ideas for attracting and retaining workers, and all are reimagining what work looks like in American vineyards.

Amelia Ceja, president of Ceja Vineyards in California’s Carneros appellation, has watched the evolution play out from both worker and producer perspective. Born in Jalisco, Mexico, Ceja immigrated in 1967 to join her father, a farmworker in Napa Valley. She founded Ceja Vineyards in 1999, and has become an advocate for the fair treatment of farm workers.

“Our parents’ generation were all agricultural workers in Mexico and they loved working the land, but the next generation does not want to do it,” she said. “It’s back-breaking work, I know; I spent years planting and pruning vines.”

The undocumented workers who have historically powered American farms began leaving “by the thousands” over a decade ago, Ceja reports, because of the increased fear of deportation and increasingly hostile immigration policies. Legal residents are opting for new jobs because of “the traumatic wine country fires and cost-prohibitive housing” she said. “No one has stepped up to take these jobs.” A shortage of manpower means winery owners are paying higher costs.

Sadie Drury, general manager at North Slope Management, a vineyard company in Washington’s Walla Walla region owned in partnership with L’Ecole N° 41, Leonetti Cellar and Pepper Bridge Winery, has slowly watched her workforce change over the last decade. “The legal residents and green card holders of the 1980s are now in their sixties, so our current workforce is aging out—this is probably the biggest labor issue that needs to be solved.”

There’s another shift as well. “As young men leave for other industries, my crew is now close to 70 percent women.”

In Napa Valley, Jennifer Putnam, executive director and CEO of the Napa Valley Grapegrowers (NVG), has witnessed the same change: “When we founded the Farmworker Foundation in 2011 to support Napa’s vineyard workers, there were hardly any women doing this farm work. Women now make up more than one-third of this workforce.”

Alison Sokol Blosser, second from left, had to call in family members to help harvest during 2020 as labor shortages plagued her Oregon winery. (Andréa Johnson Photography)

Rise of the machines

Forced to make do with fewer workers at higher cost, many are turning to machines—particularly as those machines improve. Though California winemakers have mechanically harvested grapes since the 1970s, and today upwards of 80 percent of the state’s wine grapes are machine-picked, it was a long-held belief that hand-harvested grapes were superior.

“I questioned whether people would pay $80 for a bottle of machine-harvested wine, but when I saw the quality that machines can give us today—it’s grape caviar,” says Sokol Blosser, who has invested in a Pellenc grape harvester and two row sprayers to reduce labor needs.

Chris Indelicato, president and CEO of Delicato Vineyards, one of California’s largest producers, began transitioning to machines many years ago in response to what he describes as the “historic numbers of unfilled positions” he started to observe back in 2008. “We are pushing for mechanized solutions for anything we can successfully automate,” he said, and has replanted his vineyards so they can be mechanically harvested and maintained. Mechanical pruning can slash costs by 90 percent, according to a U.C. Davis study.

Torkelson says that Trinchero has been experimenting with driverless tractors and other autonomous vehicles and using drones and robotic software to assess vineyard health.

Yet machines will never fully replace people, particularly in ultra-premium regions like Napa Valley, argues NVG’s Putnam. “We have always had greater needs year-round than other crops and other wine regions, because of the level of attention to each vine.” She believes that Napa has partially solved its labor problem through higher wages—seasonal workers in Napa earn a median wage of $18.50 per hour and year-round workers earn $20.31, compared to California’s minimum wage of $12 per hour.

Opus One winemaker Michael Silacci (who also serves as NVG’s current board president) believes the higher wages are worth it. “Grape quality has the largest impact on wine quality,” he said. “Skilled vineyard workers are like sculptors, and consumers respect the hands-on aspect of premium winemaking. Are consumers willing to pay higher prices for that? I believe they are for high-end wines.”

Vintners have also found that offering workers free English classes, better housing options and assistance with navigating the school and legal systems are equally compelling benefits. “Simply raising wages is not the answer to this labor crisis,” said Indelicato. Offering paid holidays and paternity leave, full family health insurance, 401K plans and university scholarship programs for his workers has had “a huge impact over time” for Delicato, he reports. “We continue to focus on the work environment and culture, and provide opportunities for workers to grow their careers.”

With more women and mothers in the workforce, offering greater flexibility has also become critical. “People can’t always work from 6 a.m. to 3:30 p.m., and we have found being flexible to work with people’s schedules has been enormously effective, particularly for my young mothers who had no childcare or school during the pandemic,” said Drury.

Other wineries reported giving employees more control over their own schedules, offering four-day work weeks and offering childcare to improve work-life balance for their teams.

Addressing the health needs of a workforce that has traditionally had limited access to health care—and has been traumatized by high-risk work in wildfire zones in recent years—is another way to support workers. Napa’s Silver Oak Cellars partnered with the Botanical Bus, a nonprofit mobile clinic that provides health and wellness services to farmworkers. “We need to find ways to cultivate this very eager-to-work population,” said Putnam.

Looking where the workers are

A growing number of vintners are turning to the government’s H-2A visa program to bring in temporary workers from Mexico. Seghesio Family Vineyards’ owners have filled all of their needs with one highly skilled group of workers from a 50-person extended Mexican family that has come to live in a large hacienda on the winery’s Sonoma property from March to November each year since 2005.

Employers in the H-2A program are required to first try to recruit domestically. “It’s not a question of offering higher wages, we just do not see local applicants,” said Ned Neumiller, Seghesio’s viticulture director.

Costs have increased—the hourly wage set by the Department of Labor for guest workers jumped from $14.98 to over $16 in 2021 and then to over $17 in 2022—but Seghesio winemaker Andy Robinson says it is an overall cost savings and he’s convinced it is the best way to secure legal, highly skilled, committed workers. “We saw our neighbors Dutton Estate Winery and Martinelli Winery using the program and we now recommend H-2A to many of our growers who are struggling to find a crew.”

Many advocates argue that the government must reduce the burdensome bureaucracy of the H-2A program so that producers of all sizes can more easily bring in foreign workers, and change other laws to make it simpler for guest workers to get here. “We need immigration reform that would allow for workers to come here to do the work that people in this country don’t want to do,” says Ceja. “It is the right and humane thing to do for migrant laborers, but also for small American farmers.”

A more nuanced understanding that the best interests of worker and winery are inextricably linked—and a new spotlight on the humanity of the farmworker—could be the upside to the labor struggles plaguing producers.

“Behind every bottle of wine there is a person who tended that vine, and we need to help wine drinkers see the humanity of the people who do this work,” says Drury, who launched a Farmer Fridays series on her Instagram account, featuring a photo and bio of a different employee each week. “We are not just here to take care of the land and the business, but the people who farm the land. I think labor practices will become a much bigger part of the conversation, particularly as younger consumers drink more wine.”