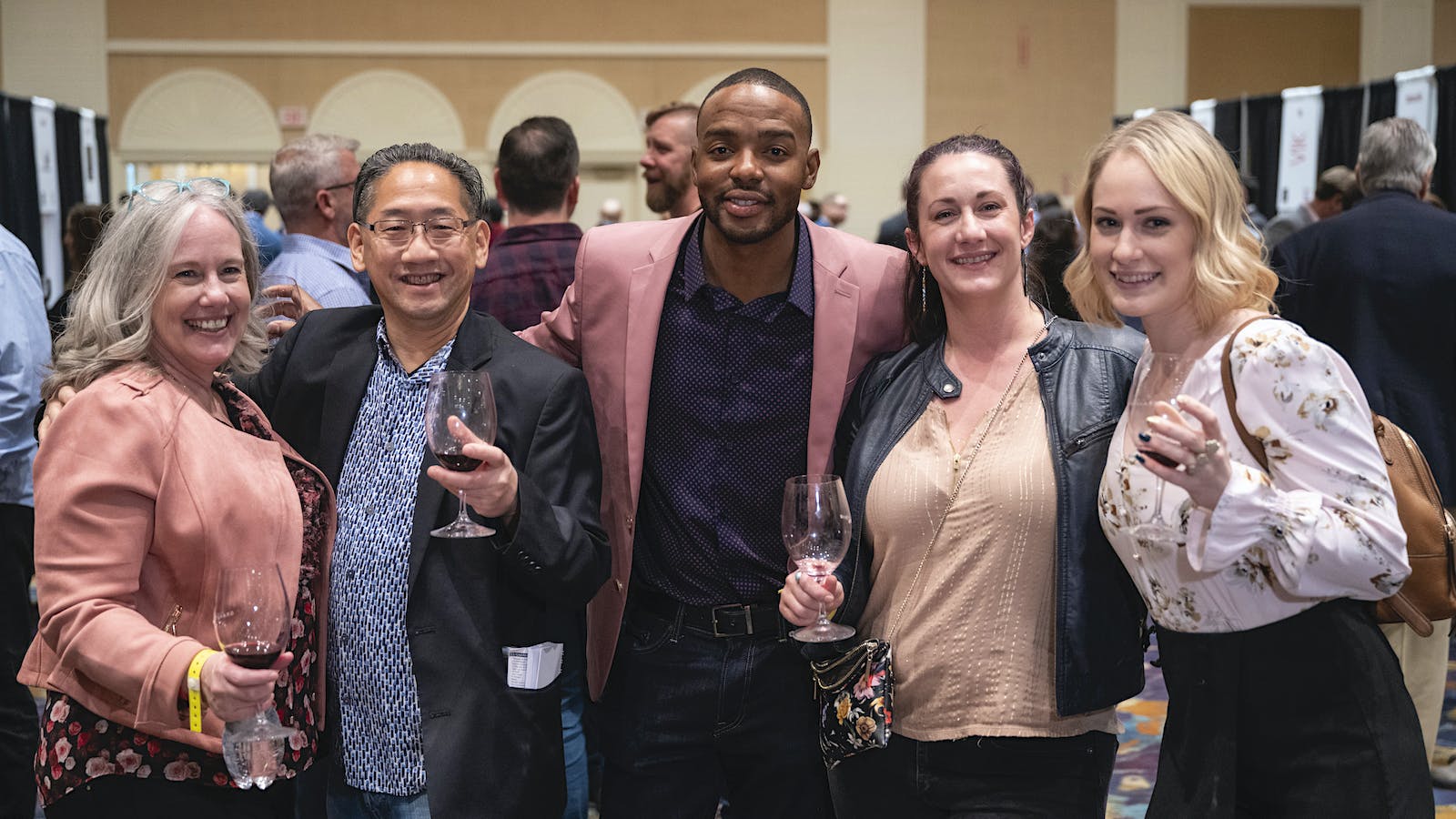 The energy was electric inside Las Vegas’ Mirage ballroom Dec. 4 as wine lovers gathered for the first installment of Wine Spectator’s 2021 Grand Tour. This sold-out event was the first Grand Tour since April 2019, and represented a much-anticipated reunion for the wine community.

“It’s really exciting to be able to reconnect with people and talk about our wines again,” said Gavin Speight, vice president of Old Bridge Cellars, which imports Australia’s Leeuwin Estate wines, among other wines from around the world. He was pouring the 96-point Leeuwin Estate 2017 Art Series Chardonnay from Margaret River. “Tonight, it really feels like we are really back.”

For many international wine producers, the Las Vegas Grand Tour—to be followed by stops in Washington, D.C., and Chicago—was their first trip to the U.S. in over two years. “I have not traveled overseas since 2019 and I came for this event; I have so much emotion to be here,” said Joan Cusiné Carol of Spain’s Parés Baltà, who was pouring the Parés Baltà Brut Nature Cava Blanca Cusine 2011. “It’s wonderful to see how well-attended this special evening is; people are so happy to meet with the people making the wines they love.”

Tickets are still available for this year’s Grand Tour stops in Washington, D.C., on Friday, Dec. 10, and in Chicago on Wednesday, Dec. 15. Visit GrandTour.WineSpectator.com and get your tickets now!

Longtime Wine Spectator event attendees lined up early for the VIP hour. For Debbie and Jerry Greenfield of Fort Myers, Fla.—who have attended 21 Wine Spectator Wine Experiences and many Grand Tour events—the spirit of the crowd felt different this time: “The line was a mile long to get inside, people are just so excited to be back together,” said Jerry. “But there is plenty of wine and plenty of room, and we feel perfectly safe to be here because of the strict vaccination criteria for attendees.”

Alex Guarachi and his daughter Sofia of Napa’s Guarachi Family Wines poured their 2015 Cabernet at the Grand Tour. (Jacob Kepler)

Barbara and Irwin Weinberg have been attending for years, she said. He is 88, she is 85; they came from Cincinnati for the event. “My husband collects wine; this is a chance for him to check some bottles in his cellar.”

Barbara fell into easy conversation at a table with John Williams and his son Andy, who came to celebrate their birthdays. John, 68, lives in Texas; Andy, 40, came from Kansas. “This is a bucket-list event for us,” they said, nearly in unison.

There were many newcomers, too, lured by the opportunity to taste with some of the world’s most esteemed producers. Each winery was pouring a flagship bottle which scored 90 points or higher on Wine Spectator’s 100-point scale, including gems like Diamond Creek 2017 Red Rock Terrace, Ceretto 2016 Barolo Brunate and San Filippo Brunello di Montalcino Le Lucére Riserva 2013.

For first-time attendee Meredith Smith, winemaker at Sawtooth Winery in Idaho’s Snake River, the event was both pleasure and research. “I came from Idaho to Las Vegas for one day because I want to understand the characteristics of 90-plus point wines,” she explained. “I’m here to taste the consistency in these wines and take this knowledge back to my own winemaking. My goal is to have my wines in these ranks one day.”

More than 1,000 attendees enjoyed more than 200 wines from around the world, all rated 90 points or higher. (Jacob Kepler)

Lisa Vassar, director of nuclear facilities with TerraPower, was another first-timer. She came from Seattle with a group of wine-loving friends. “They twisted my arm,” she said with a smile. “At first I was afraid I wouldn’t be able to taste the difference in the wines. But the way the tasting was laid out made it easy to compare and really helped a lot.”

While there was tremendous enthusiasm for classic hits like Stag’s Leap Wine Cellars Cabernet S.L.V. 2016, there was also curiosity for exploring lesser-known wines like the Coto de Imaz Rioja Reserva 2016 sourced from 50-year-old Tempranillo bush vines—a terrific value at only $22—which proved a crowd favorite.

There were also new leaders from legendary properties in attendance, including Federica Rosy Boffa who, at age 23, is running her family’s Piedmont estate, Pio Cesare, following the tragic death of her father, Pio Boffa, from COVID-19 in April 2020.

It was an important milestone for the Las Vegas wine and restaurant community, as well, which continues to need support in this period of recovery. Christian Navarro, co-owner of Wally’s, a wine retailer with two Los Angeles locations which includes a Wine Spectator Grand Award–winning restaurant, has just opened a new wine shop in Resorts World, one of Las Vegas’s newest premium resorts. “We’re off to a great start,” Navarro said. “Las Vegas is really coming back to life.”

While some European winemakers were unable to attend due to travel restrictions, their U.S.-based representatives brought enthusiasm to spare. “I think there is so much pent-up demand,” observed E. & J. Gallo’s Lon Gallagher. “People have been missing each other and in-person wine events. There is a vibe of genuine enthusiasm to be here; people are having a great time.”

As international travel restrictions ease, there is more star power on the way. Gallagher says that Marilisa Allegrini, representing the sixth generation of Valpolicella’s renowned Allegrini estate, will be attending the Chicago Grand Tour to pour her Amarone Della Valpolicella Classic 2016, and several other of the Italian wineries that Gallo represents will be sending winemakers for the Washington, D.C., event.

Over the past 18 months, wine producers around the world have found success engaging with consumers in numerous creative ways, yet nothing can replace the in-person connection, says Siduri winemaker Matt Revelette. “Digital can take you pretty far, but this is the link that we have all been sorely missing. It’s so wonderful to see old fans of our wines and meet new people, too; to have conversations, tell our story and see people’s expressions. Wine is an experience to be shared and this event has brought that back for us.”

How Does Soil Effect the Taste of Wine?
Wine Spectator’s No. 4 Wine of 2022
Chateau Crusquet de Lagarcie 2019 Blaye Cotes de Bordeaux, France
According to an old Polish recipe! Chicken legs, wine and a pan
Ranking Trader Joe’s Wines under $20 #shorts