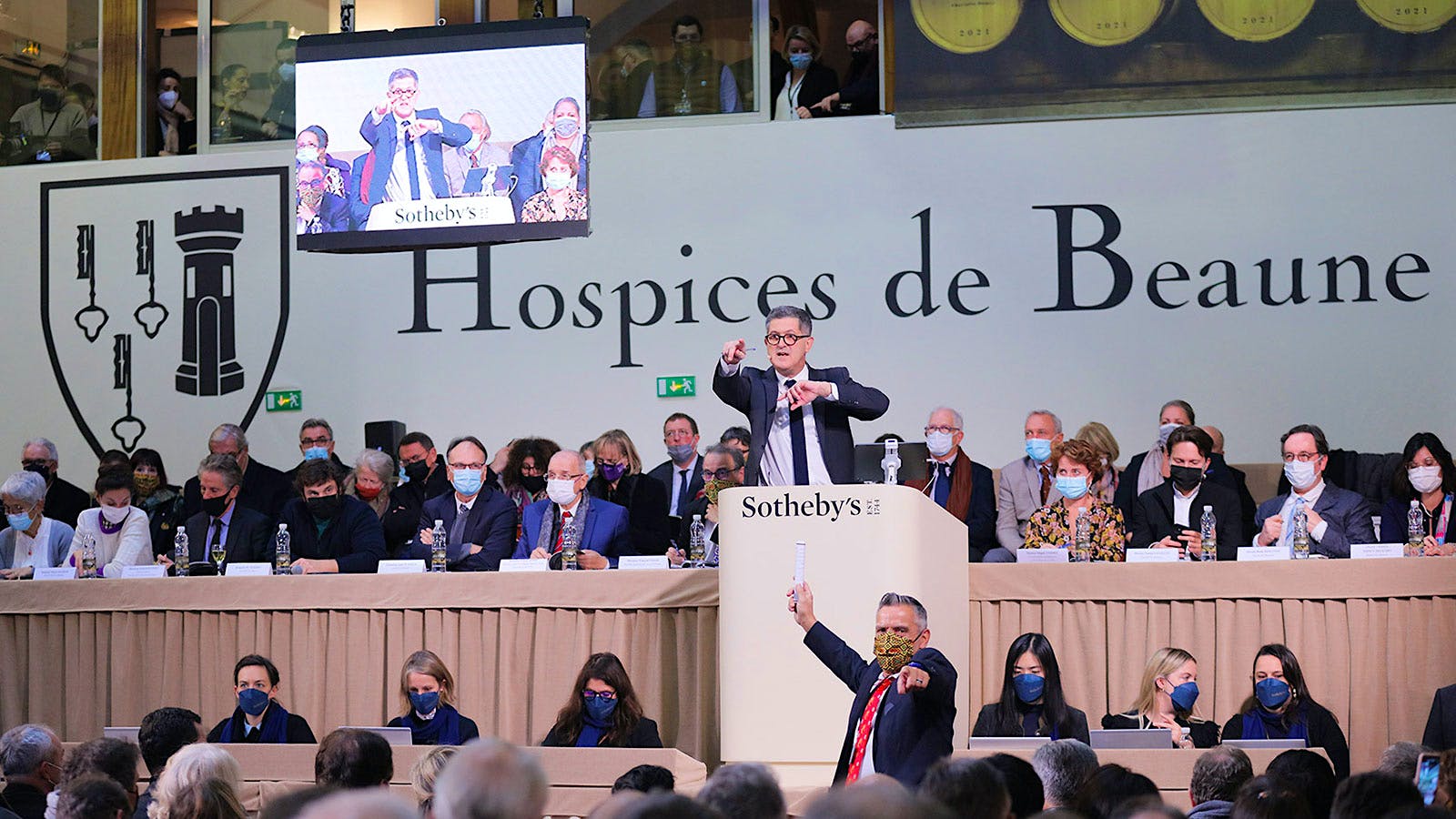 Burgundy’s historic Hospices de Beaune charity auction roared back to life Nov. 21 after delaying and limiting its 2020 auction, setting a new record in front of a packed house. The 161st iteration of the auction raised a total of $15.3 million, including premiums, for multiple charities.

The highlight of the sale was a record high price for the charity barrel “Pièce des Présidents,” selected from the grand cru Corton Renardes vineyard, which sold for $900,000 to London-based fine wine merchants OenoGroup. The proceeds will be split between two beneficiaries, Fédération Nationale Solidarité Femmes and the Institut Curie.

The auction also marked a new partnership between the Hospices Civils de Beaune and auction house Sotheby’s, which took over running the event this year from Christie’s. “It was a huge success—beyond our highest expectations,” said Jamie Ritchie, worldwide head of Sotheby’s wine, in an interview with Wine Spectator. “This year’s auction, with 362 lots, achieved an average lot price of $39,178, compared to 2020, when 638 lots were sold for an average of $24,443, giving a more than 60 percent increase in price per lot this year.”

The average increase in price for barrels of white Burgundy was 115 percent, while the reds outdistanced their 2020 counterparts by 56 percent. Two barrels of Bâtard-Montrachet grand cru, Cuvée Dames de Flandres 2021, each doubled their high estimate, selling for $280,420 and $249,940, respectively.

The 2021 harvest, vinified by winemaker Ludivine Griveau and her team, was more than 40 percent smaller than the 2020 crop, but that didn’t stop 700 attendees from packing the Halle de Beaune and yelling over the three auctioneers who split duties over the course of the six-hour auction. Last year’s event limited attendance. Telephone bidding was also feverish.

Albéric Bichot, managing director of merchant house Albert Bichot and president of Union des Maisons de Vins Grande Bourgogne, was the top bidder in the auction, acquiring 45.5 barrels for a total sum of $2,227,680. “This was another great day for the Hospices de Beaune and I am very proud, firstly as a citizen of Beaune, but also as president of the Union des Maisons de Vins de Grande Bourgogne, to have actively participated in this success,” he said in a statement. “This year’s wine sale will help finance the reconstruction of the hospital, which has a total budget of [$75 million], and will provide the medical facility with better equipment to fight breast cancer.”

The climax of the event was definitely the Pièce des Présidents. The President’s Barrel is traditionally sold at the Hospices with the help of celebrities: This year, French actors Jeanne Balibar and Pio Marmaï represented the two charities that will use the proceeds to combat violence against women and fight breast cancer. “Bidding opened to the strains of Aretha Franklin’s ‘Respect,’ and over the course of a memorable 15-minute bidding battle, the audience erupted into applause several times as the figure rose ever higher,” said Ritchie.

For Sotheby’s, the auction marked an impressive debut. “It was an incredible team effort from everyone involved,” said Ritchie. “We had 55 people from our Sotheby’s France team and 10 from our global wine team, all in Beaune, including three brilliant auctioneers. Working together with the outstanding team from the Hospices de Beaune, and their exceptional wines, and supported by the generosity of both the négociants and the private individuals, we were able to combine together to create something truly special and unique.”