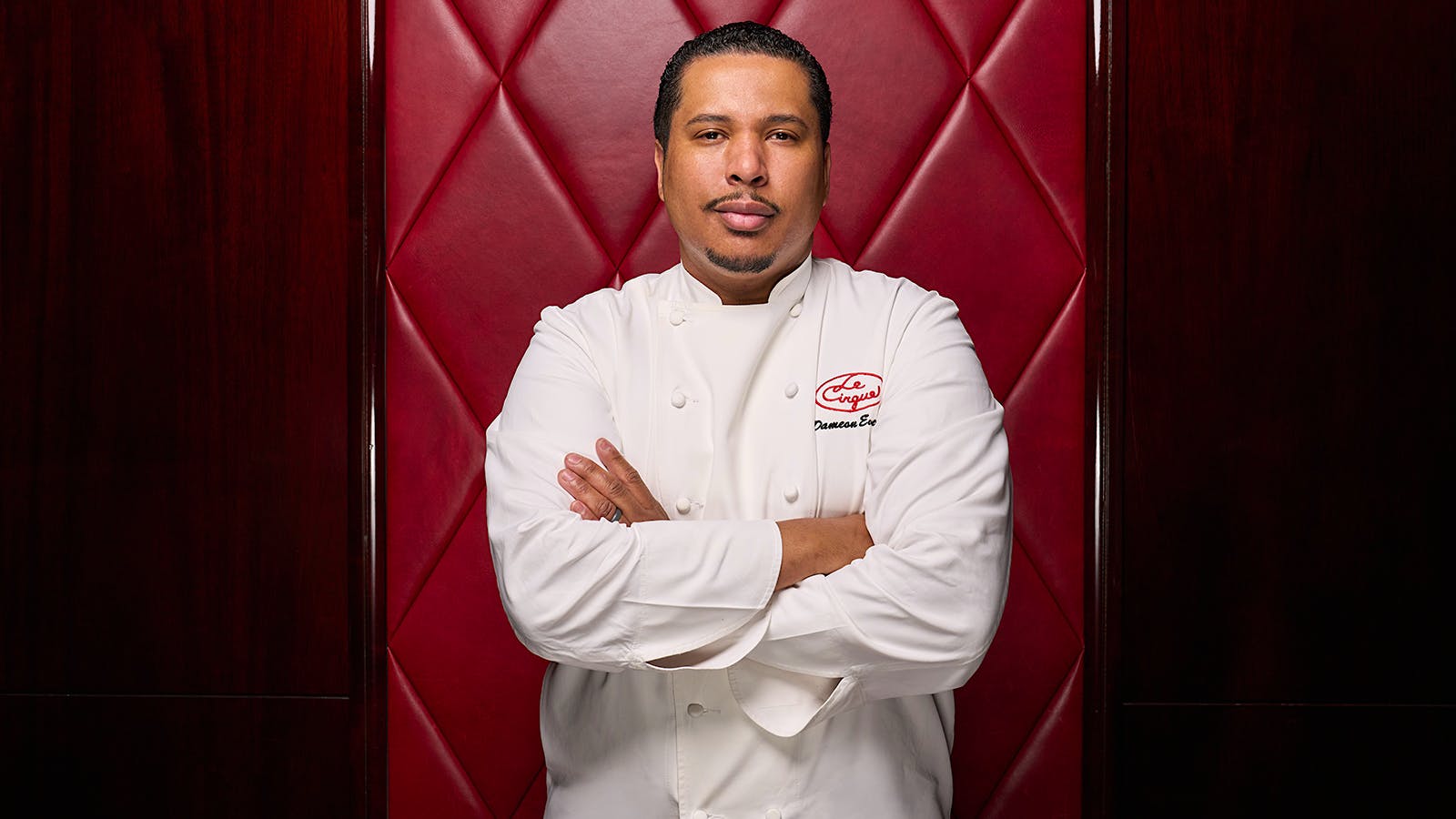 “I’m honored to be working in the Le Cirque kitchen and with a team that executes first-class dining experiences on a nightly basis,” Evers told Wine Spectator via email. The chef previously worked at the two Best of Award of Excellence–winning locations of Angler in Los Angeles and San Francisco, as well as at Thomas Keller’s Bouchon Beverly Hills and Gordon Ramsay’s namesake spot in West Hollywood.

Much of Le Cirque’s team has returned, including lead sommelier Sanae Halprin, whose wine list still focuses on Burgundy and Bordeaux, as well as California, Italy and other French regions. But there have been some changes. “The size of the wine list has been condensed to focus on exclusive wine offerings in France,” Halprin said. “Prior to the closure, we had more wine labels from different regions, but we made a conscious decision to bring an even greater focus to our French wine selections.” The program now features just under 700 labels, down from 740, and a 3,400-bottle inventory. Halprin is especially excited to see guests try distinctive regional offerings like Cahors, sweet Jurançon and a sparkling wine from Savoie. “I intentionally selected these wines so guests could taste labels from every corner of France, allowing for a new and diverse tasting perspective.”

Le Cirque is continuing to serve its French-influenced, prix-fixe menu of dishes like Ossetra caviar with buckwheat nori crisps, Hawaiian kampachi with radish and ricotta gnudi with Alba white truffles. “The cuisine pays homage to Le Cirque’s culinary legacy, along with adding more upscale French dishes with Californian influences,” Evers said. He plans to incorporate tableside experiences, more wood-fired cooking and seasonal menu changes as well. “We look forward to welcoming our old and new guests as we continue the restaurant’s legacy of delivering exceptional cuisine and memorable hospitality.”—Collin Dreizen

When chef José Andrés’ ThinkFoodGroup made its Chicago debut this summer with a riverfront café and an outpost of Restaurant Award–winning tapas chain Jaleo, the group had plans to open three more concepts by the end of the year. The latest of those openings, Pigtail, arrived Oct. 15.

Set in the lower level of Jaleo’s space, Pigtail draws on Chicago’s historic speakeasy tradition. “In every city, we’re inspired to bring unique elements that complement the culture and energy of our surroundings,” Andrés said in a statement shared with Wine Spectator. “I absolutely love the speakeasy bar scene in Chicago, so when I saw the lower-level space at Jaleo, I knew we could create something really special.”

The restaurant features its own concise wine list of 25 selections managed by Jaleo’s sommelier, Jordi Paronella. The selection is typical of a Spanish wine bar, with bottlings of Sherry, plus sparkling and still wines from across Spain’s top winegrowing regions. “We’re combining two of my favorite things: jamón and cocktails,” Andrés said. “It’s going to be a fun destination to start or end your night.”—Taylor McBride

There’s a new beverage director at Best of Award of Excellence winner Harbor House Inn in Elk, Calif. John Miller now runs the wine program at the inn and restaurant about 80 miles northwest of Healdsburg, replacing Marsella Charron, who departed her position this summer.

After working in major cities around the world such as Hong Kong, Oslo and Paris, Miller says the natural beauty of the isolated property was a big draw. As was chef Matthew Kammerer’s ambitious tasting menu inspired by the oceanside setting. “The concept of the restaurant is exactly what I always wanted to do,” Miller said. “I feel like a lot of roads have led me to a wine program like this.”

Miller’s fine-dining experience began in the kitchen, including stints at Thomas Keller venues in New York and Napa. He’s also worked for a Norwegian natural-wine importer and served as a sommelier on Grand Award winner SingleThread Farms’ opening team. The wine programs he’s run in the past include an exclusively Old World list in Norway and an exclusively Pacific Northwest list in Washington; but at Harbor House, “I can do it all,” he says.

The international wine program comprised about 500 selections earlier this year, showing strengths in California and Burgundy. Miller has already grown that number to 750, with more bottlings on the way. Among those additions are iconic producers from France, Italy, Germany and Austria alongside more local selections from celebrated California producers like Liquid Farm and Stubbs. “I try to really preach West Coast producers, because we’re here and we make such incredible wines out here,” he said. He’s added 150 labels in just the past two weeks, with some sourced from private cellars, and hopes to hit 1,000 by the end of the year. “The support from the ownership here is overwhelming with wanting to grow the cellar, and the experience as well.”—Julie Harans

Angus filet mignon is among several meaty options at the newest Bourbon Steak in Seattle. (Courtesy of MINA Group)

Michael Mina and his eponymous restaurant group opened a new outpost of Bourbon Steak in the former home of RN74 Seattle. The group closed the popular fine-dining destination, which held a Best of Award of Excellence for its 2,450-selection wine list, early this summer due in the aftermath of the pandemic.

Bourbon Steak is a growing concept for the group, with three Restaurant Award–winning locations in Washington, D.C., Miami and Scottsdale. While the wine program won’t be as encyclopedic as RN74’s, corporate wine director Jeremy Shanker plans to grow the list to 1,000 selections. The current 750 labels highlight Pacific Northwest wines with strong additions of Champagne and reds from Rhône Valley, Piedmont and Burgundy.

The kitchen, which is led by chef Adam Reece, sources local ingredients for classic steak-house and seafood dishes like Washington state oysters with green apple and Champagne mignonette, tuna tartare and a variety of prime cuts. Other dishes include the Maine lobster pot pie and sides like black truffle mac and cheese, Brussels sprouts and creamed spinach.—T.M.