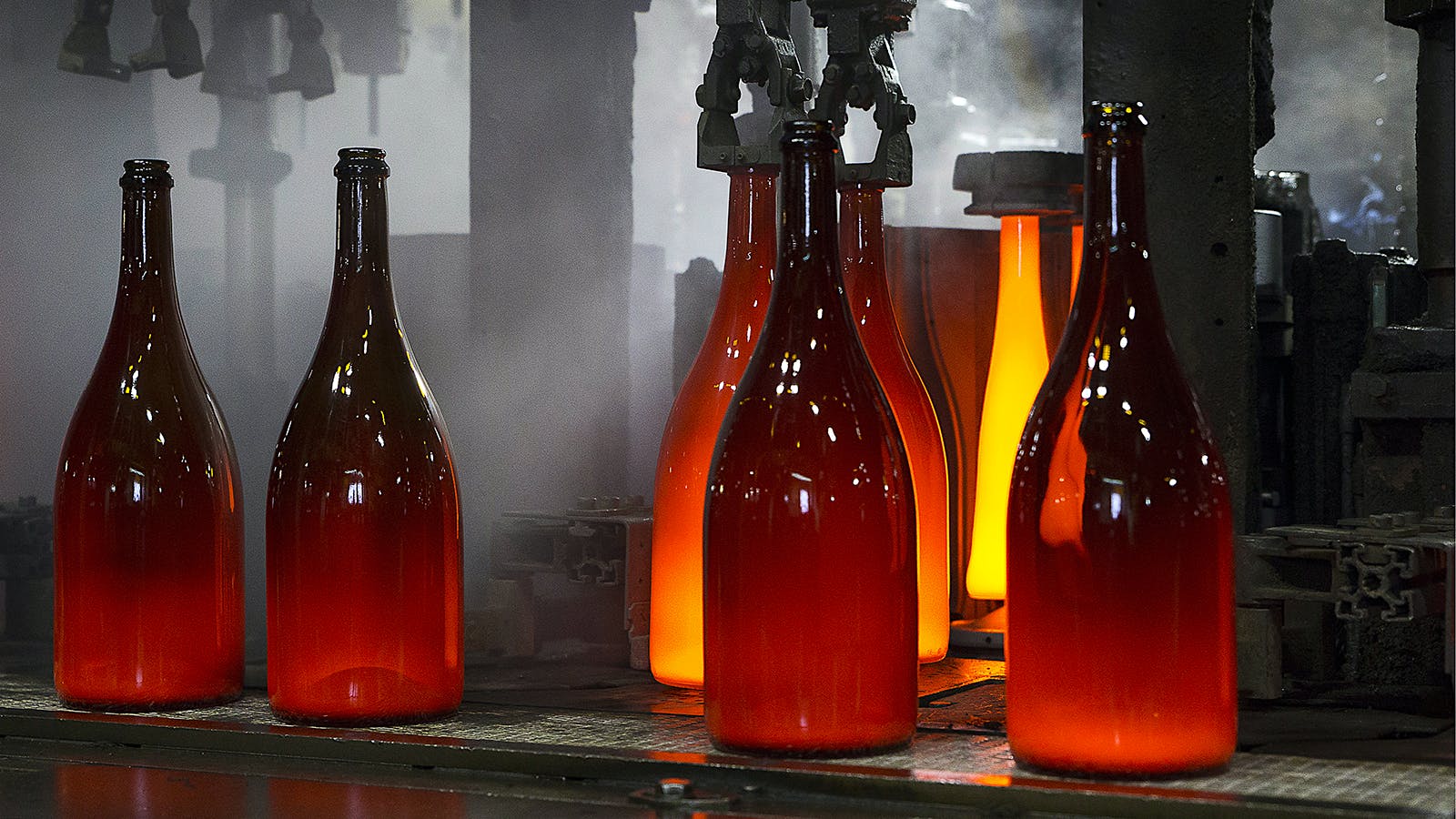 On Sept. 19, an oven caught fire at one of Argentina’s largest glass factories in Mendoza, quickly spreading across an entire floor, destroying machines and supplies. Verallia, which makes 35 percent of Argentina’s wine bottles, had to take its operations partially offline as it began repairs. The incident sent local wineries into panic mode.

Making wine is hard, but getting it to the consumer can be even harder. From Argentina to California, the wine industry is currently facing an acute glass shortage that is hurting small wineries particularly and forcing larger ones to think nimbly. And that’s just part of a supply chain headache inflicted by the pandemic, from a lack of labels to a dearth of truck drivers to deliver them. It could all lead to fewer choices on store shelves for consumers.

According to Jeff Mausbach, co-owner of Argentina’s TintoNegro and Manos Negras, there are four major factors fueling Argentina’s wine supply chain problems. The first factor goes back to spring 2020, when manufacturing was interrupted by shutdowns and people unable to work. Mausbach says that even when workers were able to come back, outputs at bottle, case and labeling manufacturers were drastically lower than pre-pandemic.

The second factor is the sharp rise of at-home consumption. According to Argentina’s National Institute of Viticulture (INV), a government agency, domestic wine consumption rose 6.5 percent from 2019 to 2020 (an increase of 57 million liters). In a country where 70 to 80 percent of the wines produced are consumed locally, that makes a big difference.

“Everybody was closed up in their house and they couldn’t go out,” Mausbach said. “They couldn’t spend money at restaurants, concerts, bars, so all of a sudden they all have more disposable income. They came back into contact with their traditional cultural practice of consuming wine.”

At the same time, dry goods such as cardboard boxes and adhesive labels were increasingly hard to find. In Argentina and many other countries, wineries rely on imports. The Argentine wine industry imports 100 percent of its adhesive paper for labels. Those manufacturers in Italy were also experiencing interruptions. “I did experience shortages, price increases and production delays in both carton cases, self-adhesive labels and most importantly the bottle situation,” said Mausbach.

Argentina has three major glass producers: Verallia, Cattorini and Owens-Illinois Argentina. Verallia’s oven incident, the other manufacturing disruptions and increased wine consumption all put pressure on these companies to produce at a level they simply couldn’t reach.

The fourth factor Mausbach points to is panic buying. From distributors to small wine stores, people started hearing about the bottle shortages and stocked up on wine (similar to what we saw with toilet paper at the beginning of the pandemic). “It’s a self-fulfilling prophecy,” he said. “A vicious cycle where people perceive a shortage and order more, making that perceived shortage real and making it more acute and spiral out of control.”

American vintners are grappling with their own glass problem, and Mike Eaton isn’t surprised. The Jackson Family Wines senior vice president of supply chain management says that glass has always been hard to source, especially since there is not enough domestic production capacity in the U.S. The industry mostly relies on imported glass. Wineries that depend on imported glass are seeing up to 12-month delays on bottles.

The delays tend to hurt the small guys. “The smaller producers are left holding the bag because they don’t have leverage to get contracts with domestic producers, so they often buy through brokers and distributors,” Eaton said. “For big companies like us we buy almost all of our glass from domestic producers.”

One of those smaller producers is Maysara Winery in McMinnville, Ore. Tahmiene Momtazi hasn’t been able to bottle her 2020 wines yet, pushing back bottling four times due to glass shipment delays. The Maysara winemaker has been told she would get glass in December, but has been reaching out to importers, distributors and neighbors for quicker solutions. In the meantime, she’s been moving wines into temporary storage bladders in order to get more tank space for next year’s wines. Luckily, the 2019 vintage was bottled in August.

“One problem creates another one and it’s a domino effect,” said Moe Momtazi, Maysara founder and Tahmiene’s father. “You spend quite a bit of time trying to fix things you have no control over. We really felt the pain.”

Supply prices have also skyrocketed for Maysara. Tahmiene said that when she received a quote for 4,000 cases of glass bottles back in September, she sat down with her dad to go over new surcharges she had never seen, from tariffs to delivery costs to ocean freight fees. Last year, she was paying $7 for a case of glass bottles. Now it’s over $9.

Trucking has been the biggest headache as the U.S. faces a shortage of drivers. Last year, Tahmiene was paying $400 for truck deliveries to her Oregon facility; now she is being charged $2,400. She even offered to pick up the glass from the port herself.

Moe says that these price hikes and shortages have been worsening over the years, but the pandemic threw it into overdrive. The winery is also grappling with the nationwide labor shortage. At 10,000 cases per year, Maysara is considered a small winery, but the team is still having a tough time bringing workers back. Tahmiene says making employees feel safe and convincing them to get vaccinated has been exhausting. At one point, she turned to her daughter’s nanny’s husband, a local baseball coach, to lend some players to help bottle wines.

Container ships line up offshore, waiting to offload at the Port of Los Angeles, which has been slowed by a lack of workers. (CVG/Getty Images)

Eaton explains that U.S. glass production has been in turmoil for the past two decades. American wineries began to source glass bottles from China in the late 2000s. But tariffs imposed by the Trump administration, which are still in place, are making it costly for small wineries to order from China, leading to more demand on foreign glass producers in Australia and Chile.

Meanwhile, bottles and many other supplies are caught up in global shipping delays aggravated by the pandemic, sitting at sea for long periods of time. Mausbach, who exports his wines from Mendoza to ports in Chile, says he used to be able to have wine ready to ship in two to four weeks. Now, it takes an additional four to six weeks before the wines can get a spot on a boat. The wines end up sitting at his warehouse when they could be on a shelf at a wine shop in New York.

Getting a reservation on a boat and having the wines go to sea isn’t the only headache; unloading at the port is another one. The shortages of truck drivers and port workers are causing delays of up to two weeks in unloading containers. Luckily for Mausbach, his containers are sealed with temperature liners that wrap the walls of the container and keep temperatures at roughly 65° F throughout the journey. This prevents heat stress on the wines.

Eaton says that the lack of labor at the ports has hurt the ability for Jackson Family Wines to scale up to match demand on a long-term basis. And it’s an industry-wide problem. “The single biggest impact that’s hitting everybody’s supply chain is we just can’t get containers off the docks,” he added. Eaton believes the port congestion will take another year to 18 months to fully resolve.

Back in Argentina, the INV partnered with local glass manufacturer Cattorini to help small bodegas bottle their wines. “Operation One Million Bottles” aims to provide 1 million glass bottles to small wineries that enlist in the program. So far, 150 wineries have sought assistance.

“It doesn’t solve the problem,” said INV president Martín Hinojosa in a recent TV interview. “But this offers a possibility for the small bodegas that need glass in this important time to at least access it and get to the markets before Christmas.”

Long-term solutions require much more work. The U.S. only has two major glass manufacturers: Owens-Illinois and Ardagh Group. There is little desire to build more glass plants and expand an industry that hasn’t changed much in the past 30 years, mostly because of environmental concerns. Eaton explains that glass furnaces are a “high carbon emissions item” and there are political and financial hurdles for new furnaces to be built.

“The glass industry as a whole really needs to innovate and figure out a carbon-neutral or carbon-friendly way to significantly reduce the carbon impact of melting glass,” he said. “Then you would see furnaces expand.”

Eaton says that Jackson Family is at no risk of being out of stock on any products, thanks to domestic contracts, relying on imports for only a select few products and planning ahead. What the supply chain nightmare has required is, “an increased amount of rigor in our planning and to be extremely flexible when we can.”

Jason Haas of Tablas Creek in Paso Robles is ordering items earlier than he ever has. Luckily, his annual production of 30,000 cases relies on domestic glassmakers.

“We’re being told by our suppliers, ‘We’re expected to be short next year; let us know what you need now,'” Haas said. “We’re not used to having to put our glass orders in [before] the first of the year and now we’ve been scrambling to figure out how much wine we’re gonna make of [lots] that haven’t even finished fermenting so we can get our glass orders in for the end of the month.”

But there is light at the end of the tunnel, many report. Mausbach recalls logistics not being ready for the demand spike when restaurants opened—delays were at their peak in August and September. Now, his importers are taking measures to get reservations ahead of time on shipping lines. “Things are starting to get back to normal from our end,” he said.