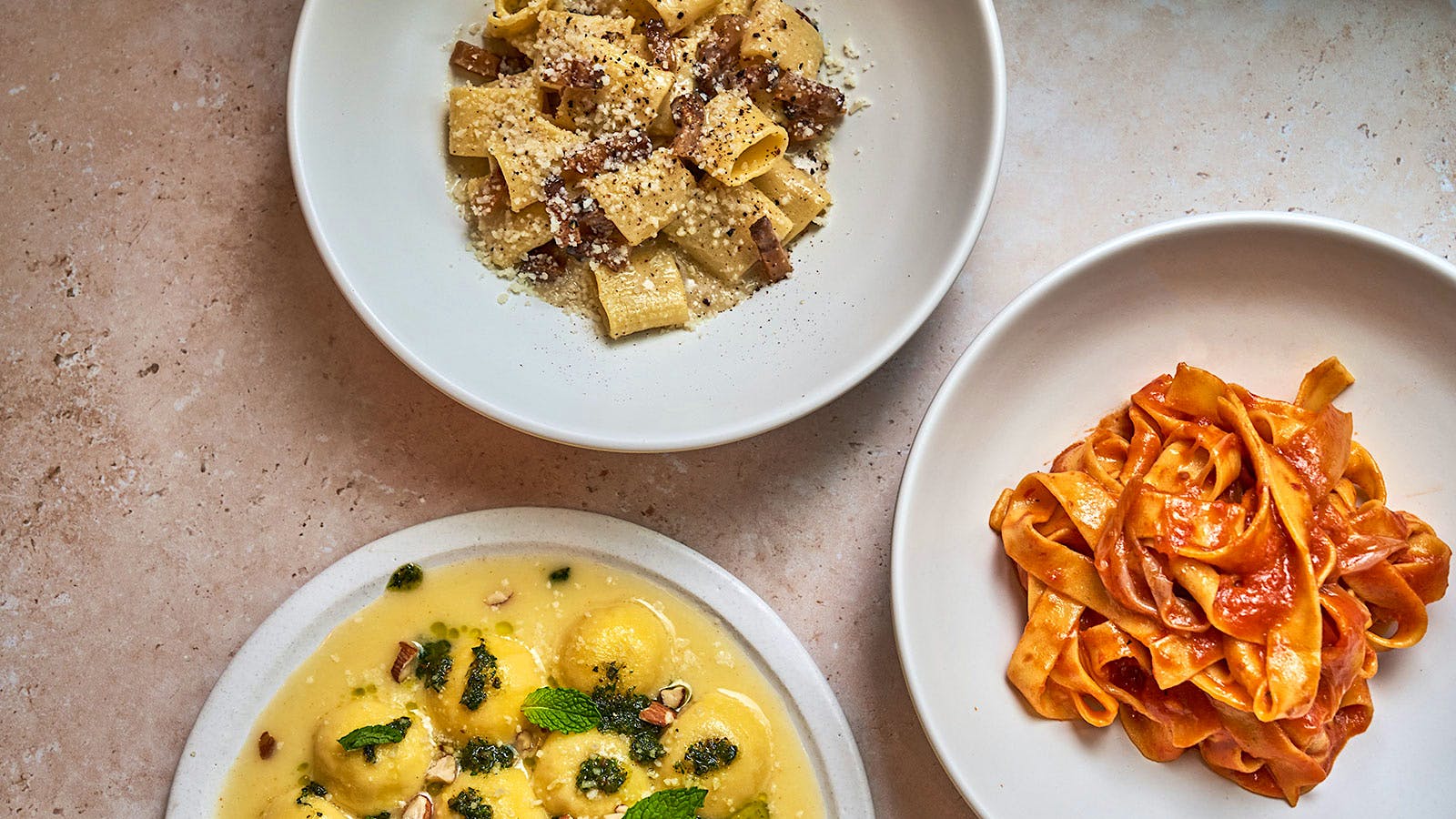 Sterling, who previously worked at Vic’s, the Beatrice Inn and A Voce, is focusing on classic dishes including homemade pastas as well as smaller bites like gnocco fritto and entrées from a wood-burning oven like whole trout with pine nuts and raisins.

“Her cooking is just incredible because it is so simply delicious,” said beverage director Robin Wright, who most recently served as a sommelier at Wine Spectator Grand Award winner Daniel. Wright worked closely with USHG’s Jenni Guizio to build Ci Siamo’s wine list, now at 400-plus selections and growing.

About 75 percent of the list is Italian, covering 20 regions around the boot. The remainder of the list hails from other major international winegrowing regions, including a strong collection of grower Champagnes “marked up as little as possible.” Overall, the list highlights smaller family-owned wineries, female winemakers and winemakers practicing mostly organic, biodynamic and sustainable practices.

While there are a few exceptions from top-notch producers, the Italian side of the bottle list is heavily skewed toward native grape varieties. So is the by-the-glass program, with more than 20 selections. “It might look kind of niche, but really it’s just honest. It’s the varieties of Italy that people don’t know because they were drinking Sauvignon Blanc from Northern Italy or Chardonnay from Piedmont,” Wright said. “So instead of having those wines, we want to focus on having Grecco and Fiano and Prié Blanc from Valle d’Aosta, for example.”

Depth is another important factor for Wright. She’s secured classic verticals and aged wines going back to the 1950s, particularly from Piedmont and Tuscany, and plans to go even deeper in the Campagnia section.

She says there’s truly something for everyone on this list, from the budget-bound to those looking to splurge; the vast majority of wines are priced under $200, including an abundance of under-$100 picks. “I hate seeing a wine list with a four-times markup and the cheapest thing is, like, a $90 Pinot Noir that you don’t want to drink,” she said. “I’m really excited about having really approachable options next to the really baller selections from Italy.”

Subtle details add to the approachable feel of the wine service, such as the cardstock-paper wine list instead of a large binder (meant to look like a wine list you might find in Italy), and smaller, “more humble-looking” stemware—that one was Meyer’s idea.

Though Ci Siamo is set in a modern building, the team consciously designed the interiors to feel warm, rustic and soulful. The open kitchen offers guests a view of the action on the ground level, while the second floor has a bar and lounge area with an outdoor patio, and the third floor houses a private dining space. An eye-catching display cellar near the entrance of the restaurant shows off some of the bottles.

With seating options ranging from standalone tables to fancier banquettes to the upstairs lounge, guests can experience everything from a quick stop-in for cocktails and snacks to a multicourse romantic dinner. “It’s definitely more casual, but there is an upscale vibe to it,” Wright said. “So I feel like it’s going to be one of those restaurants where anybody can feel comfortable.”—Julie Harans

Redwine will oversee Addison’s encyclopedic wine list, which has held Wine Spectator’s highest award since 2009 and complements the seasonal, California-inspired tasting menus by chef William Bradley. The 3,200-selection wine list offers expansive bottlings from Burgundy, Bordeaux, Champagne and the Rhône in France, as well as Italy, Germany and California.

Redwine says a 2019 dinner at the restaurant sparked her interest in the position. “As a guest and as a wine director, Addison truly represents the pinnacle of an exquisite dining experience. I truly longed to be a part of the team that curates that experience,” she told Wine Spectator. “I feel that every position that I have held has prepared me for this moment in my career.”

A Culinary Institute of America graduate, Redwine previously worked at the now-closed Restaurant Award–winning Grand Cafe in San Francisco. Her main goal now is to complement the vision of chef Bradley, both on the list and through the wine pairings—a process she says is an exciting, multidimensional experience. “It is my philosophy that I am the keeper of the legacy that I have been fortunate to inherit,” Redwine said. “It is a tremendous responsibility to be in a position to uphold such an extensive collection with such depth in producer and vintages.”—Taylor McBride

Luce’s scheduled spring 2020 renovation reveal was delayed by the COVID pandemic. “Everybody’s super excited to come back,” Garcia told Wine Spectator. “Everything that’s happened with the pandemic has motivated the team even further.”

In the interim, Garcia was hosting small events in people’s homes, which allowed a unique opportunity to refine his vision. “It really taught me to look at the whole experience, and I was able to kind of pause and really think about the approach that I wanted to take.”

He says the core of his culinary approach is celebrating Northern California ingredients, of course, while also showcasing high-quality products from other parts of the world, like Australian Wagyu and Alaskan halibut. Garcia works closely with fishers, farmers and purveyors to monitor and source in-season items. “What really wakes me up in the morning and fuels that passion, it’s really connecting with people that have the same drive and push for their craft that I do,” Garcia said.

The tasting menu is available in eight courses for $145 or four courses for $95, with a vegetarian menu available by request. Some of the plates are custom-made by a local ceramicist. The menu stars dishes like bluefin tuna with Galia melon and avocado, Japanese oak–grilled Hawaiian kampachi and pistachio-crusted duck with a gizzard-Port reduction. The optional wine pairings are mostly Californian, drawing from the cellar of more than 8,000 bottles. This inventory supports Luce’s 650-selection wine list, which excels in California, France and Italy and is overseen by food-and-beverage director Max Pilz.

The exciting new role feels especially sweet to Garcia after working his way up from his first restaurant job in 2002 as a dishwasher with no formal culinary training. “I worked tremendously hard in this industry … It’s been a long journey, it’s been an amazing journey. Cooking has brought me to so many places that I never thought I’d be,” he said. “I’m super excited to be able to do this project with the team that I have, and that I’m able to showcase my cuisine and what I was taught, and also what I believe in, and showcase the farmers as well.”—J.H.

After departing New York during the pandemic, sommelier Matthew Conway is opening a wine bar with his wife, Carissa Hernandez, in their new home of Charleston, S.C. The Tippling House debuts this week, building on Conway’s experience as wine director and general manager at Marc Forgione’s Best of Award of Excellence winner for 14 years. Before that, Conway was beverage director at the late Gray Kunz’s now-closed Café Gray in New York. “I have always wanted my own wine bar,” Conway told Wine Spectator via email, “We want to create a space for anyone who loves wine!”

Conway describes the Tippling House’s 120-label wine program as “diverse, eclectic and ever-changing, with a strong focus on wines made by growers who farm with respect for their land and communities.”

In addition to the by-the-glass selection and a daily printed list featuring many bottles under $50, there is also “Matthew’s Stash,” a more expensive selection highlighting some of Conway and Hernandez’s favorite wineries. This is currently centered on Champagne, Burgundy and the Rhône, including selections from Marquis d’Angerville, François Raveneau and Vilmart. The full bottle list offers a broader selection of wines from California, Italy, Spain, New York, Germany, Austria and Switzerland.

The wines complement executive chef Alex Yellan’s small-plates menu, crafted with ingredients sourced from local farms. Dishes include Spanish-style anchovies with roasted pepper and creamy garlic, charred Japanese eggplant with lemon-caper-chile dressing, ham skewers with Swiss cheese and shrimp toast with green tomato–chile dressing. Like the wine program, the menu will change relatively frequently, and Conway predicts a wide-ranging selection. “We will serve dishes from all over the world as long as they are wine friendly,” he said.

Conway describes the Tippling House as a fun, casual environment offering “classic Charleston comfort” allowing guests to “go back in time to a simpler era.” The interior features a sage and cream color scheme, along with original pine floors and a restored fireplace dating to 1891. Before the pandemic, the couple planned to open a wine bar in New York, but after moving to Charleston and finding this space in March 2021, “we immediately knew it was our wine bar,” Conway said. “We absolutely love the wine community down here, and they embraced us.”—Collin Dreizen